Last Saturday I thought I would write a post about new year's resolutions. I wrote and re-wrote the post three times. I was having trouble getting focused. Should it be about me, about work, about our family, a combination of those things? It wasn't coming together so I decided to give it a rest and come back to it later in the day. Or the next day.

I put on my workout clothes to go for a walk. It wasn't raining. The air was cold, but not uncomfortably so. The crisp air would feel great on a brisk walk down the hill, and back up again.

I took Sam, our chocolate lab, with me so he'd get a little exercise. I usually take Bentley our King Charles Cavalier because he's easier to manage. But he completely annoyed me the day before by pooping four times on our walk! I have no idea where all this poop comes from. But it really sucks carrying stinky poop bags so I decided to take Sam.

I had my headphones on with a little Katy Perry pumping in my ears when BAM Sam charged at a bird which flew out of a bush right in front of us. It completely caught me off guard because I was mindlessly walking along singing with Katy I got the eye of the tiger, the fire / Dancing through the fire / 'Cause I am a champion, and you're gonna hear / me roar /.........

Sam's leash was wrapped around my arm in such a way that the strong tug pulled me off the sidewalk and into the street - right on my knees. I broke the fall with my right knee, and twisted my left foot falling off the curb. I don't remember my hands touching the ground. I just remember the dog poop bag flying out of my hand. Because yes, Sam pooped within minutes of leaving. Just like his turd-ball brother. And somehow (miraculously) I did not drop my iphone. The music just blared in my ears. You held me down / but I got up (hey!) / Already brushing off the dust / You hear my voice / you hear that sound.....Seriously, I can't make this shit up.

My immediate reaction was what the F&@% just happened? I immediately looked around to see if anyone saw me. 'Cuz, wow. It was not a graceful fall. Then I thought how much that hurt! My knee was all scraped up and bleeding. My foot was throbbing. Sam was looking at me nervously. He knew he did something wrong. He started pacing by my side as he realized the walk was over. I just sat there stunned in the street.

I looked up and the dog poop bag was 10 feet ahead of me.

I called Don to come get me. I told him I fell and didn't feel like walking anymore. Would he come get me.

A car drove past as I was waiting. I watched to see if they would stop and ask if I needed help. They didn't.

I then thought I better get up before I get run over.

And then another car came up the hill.

I hobbled up and realized there was no way I could walk. I couldn't put any pressure on my foot at all.

The guy in this car stopped and asked if I needed help. He seemed very concerned and wanted to make sure someone was coming to get me. Very sweet.

Don arrived seconds later. I hobbled over and told him I thought I broke my foot.

Which I did, as confirmed by the emergency clinic. I fractured the fifth metatarsal bone. Now I have a lovely black boot on my leg for the next six weeks.

So I guess my new year's resolution is to slow down and appreciate what I have.

I really think I could have come to this conclusion without breaking my foot. 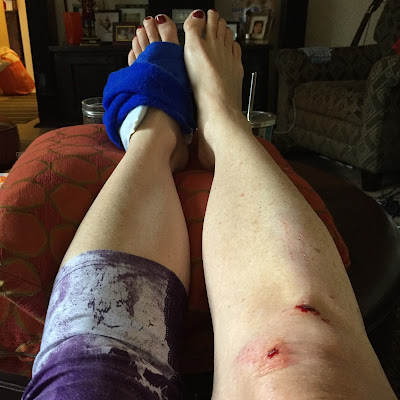 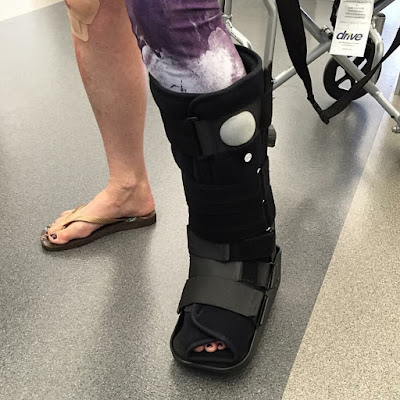 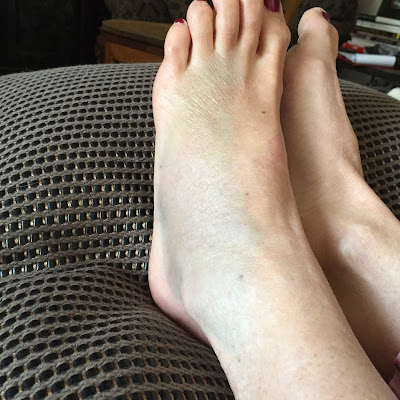 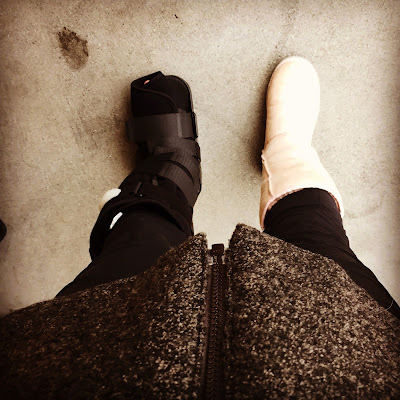 This recipe is exactly what creme brulee is supposed to taste like. The custard is creamy with great vanilla flavor and the top is crisp, crunchy and sweet. You know it's perfect when you tap the sugar top with your spoon and it sounds like you're tapping on glass. Anything else is no good.

All you need is a little torch to crystallize the sugar so it turns into sugar glass. A double boiler will work in a pinch.

I used Alton Brown's recipe with one alteration. I didn't use a vanilla bean. I have some great vanilla paste that has the brown vanilla flecks in it so I used this instead. It works perfect. You can pick up a jar at Williams-Sonoma. It's way cheaper than buying vanilla beans and tastes great. I use it in the place of vanilla in practically every recipe that calls for vanilla. 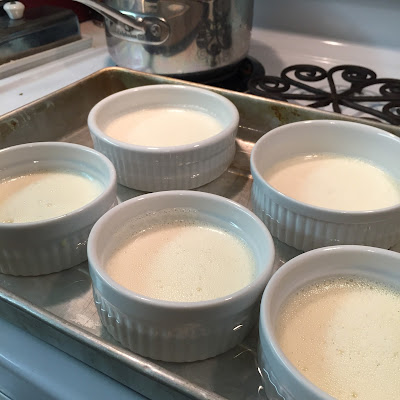 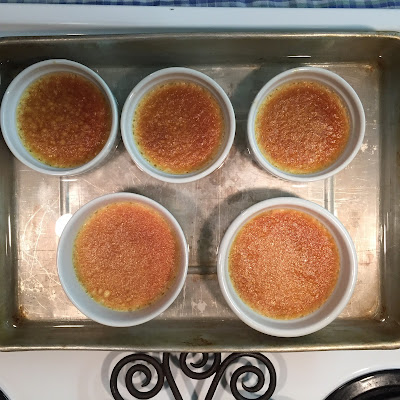 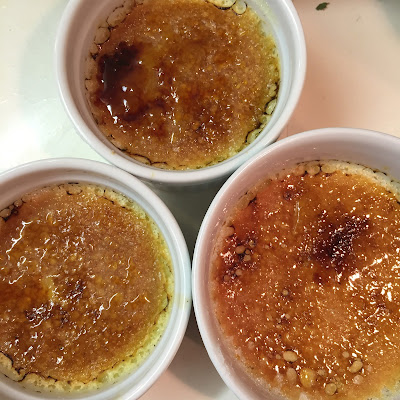 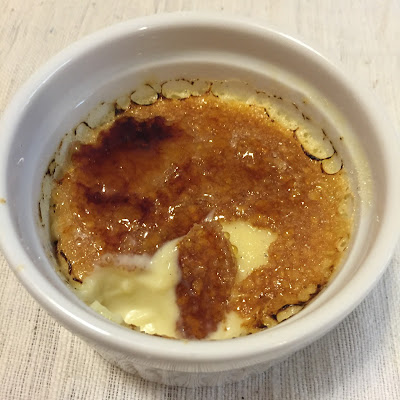 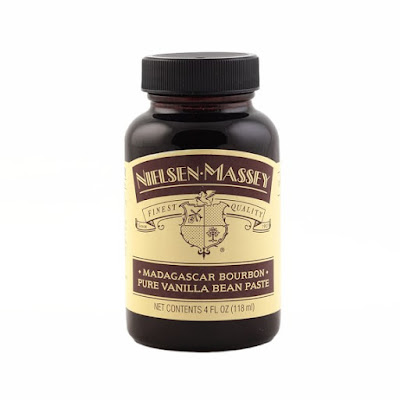 I eat two eggs for breakfast every day so I'm always looking for a new way to make them. This egg scramble is quick, tasty and healthy! A handful of spinach and a dab of cream cheese make for one tasty plate of eggs. 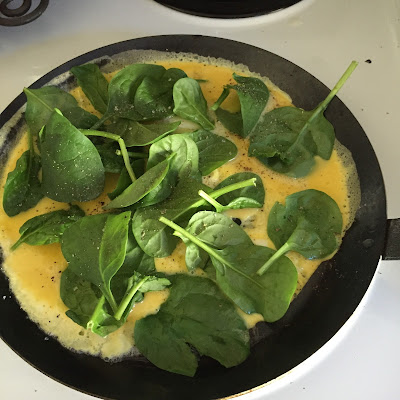 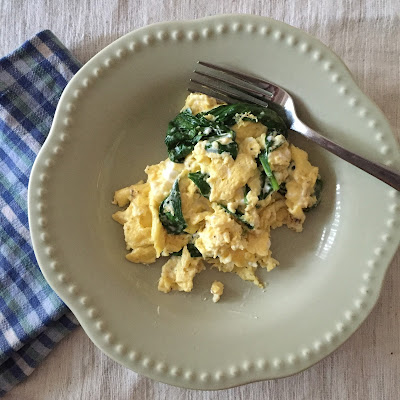 Scramble the eggs with the water in a small dish. The eggs will get a little frothy.

Add the butter to a small saute pan. Heat over medium heat. Once the butter has melted add the eggs. Season with salt and pepper. Let the eggs start to cook for about a minute. Gently fold the eggs. Add the spinach. Stir until the eggs are almost done. (Don't over stir. You want large bits of egg.) Take the pan off the burner. Add the cream cheese. Gently stir in. The heat from the pan will finish cooking the eggs and the spinach.

Serves 1
Ready in less than 5 minutes.

The pan: I like using a small non-stick saute pan. My favorite is the one from All Clad. But, I just discovered that our crepe pan (shown above) also works well! And I can just make my eggs after I've made Elli and Don their crepes.

The heat: make sure the pan doesn't get too hot. You don't want to brown the eggs. They won't be creamy.

The seasoning: try adding a little bit of seasoning salt. Not too much though. It has more sodium than salt!
Posted by Kris Mulkey No comments:

I may be losing my mind

There was hardly anyone in the office so I decided to take a leisurely lunch to kill a little time instead of eating at my desk like I usually do.

I walked over to Fog City Diner which is just a few blocks away. It has a nice bar area for us singles to eat at, and lots of people watching out the window.

They had a special lunch menu called the "Neighborhood Lunch" where you could choose a cup of potato soup or small Caesar salad and then either a albacore cheddar melt, sesame chicken salad or Southern fried chicken sandwich.

It seemed like a lot of food for lunch. But then I knew we'd be eating dinner late on New Year's Eve. And that potato soup sounded so good. So I ordered it. What the heck. I was going with the soup and the chicken sandwich. I'm by myself. Who would know except me and my ever growing waistline? And then I thought, "Oh, I'll just eat half the sandwich. It will make good leftovers." And that was that. Lunch was ordered.

I felt guilty ordering it the second the server walked away.

I shouldn't have ordered the soup. Too fattening.

I should have ordered the salad. What was I thinking? What is wrong with me?

I know what I was thinking. I was thinking how yummy that soup would be and the fried chicken would be juicy on the inside and crunchy on the outside. Perfect on a cold winter's day.

I sat there drinking my iced tea, looking at the people outside, and felt really guilty.

What has happened to my will power? I used to be so strong. I could say no to the bread, fried chicken and yummy potato soup. It's like my brain is rebelling.

My brain and waistband are at odds with each other.

I should have ordered the salad.

And then the server appeared with the cutest little cup of soup. It had a delicious drizzle of olive oil on it and crispy little pieces of bacon.

And then he set down a salad.

I looked around suspiciously.

I looked at the salad.

I looked at the server.

"Everything ok??" he said

How did that happen?

I am positive I said "Fried Chicken Sandwich" out loud. I know I did. Because the moment It rolled off my lips the guilt set in and I wondered if anyone heard me order it.

I didn't say a word. I just took the soup and salad as if I had ordered it.

Or am I losing my mind?

Did I order the salad? 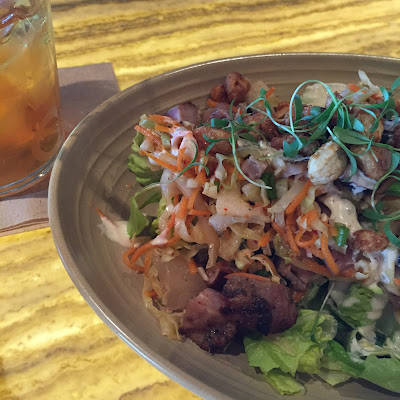