Once the musical is a must see! 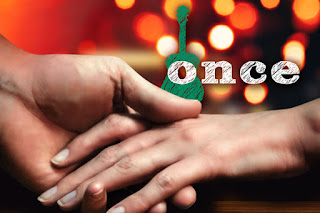 Last night Don and I went to Opening Night of the Tony award-winning musical Once performed by the 42nd Street Moon at the Gateway Theatre in San Francisco.

The play is amazing.

The music is wonderful.

The cast is extremely talented.

You have to go see it.

You'll find yourself lost in the story and falling for the characters from the first scene. 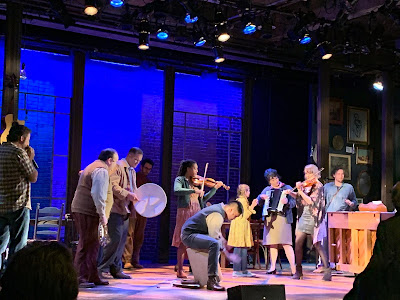 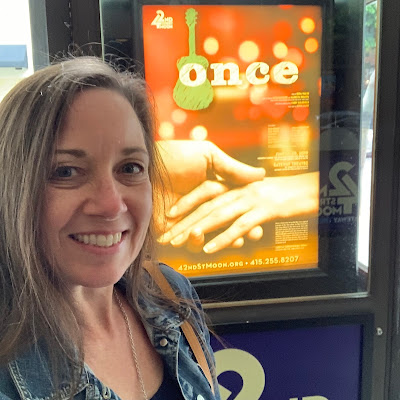 Lucky for me I received an invitation from the theatre to attend Opening Night and boy am I glad I opened that email.

We got there early enough to watch their pre-show jam session of which the audience could participate in. We didn't get on stage. But it was wonderful! What a fun way to welcome the audience to the theatre. The energy on the stage was electric. I knew we were in for a great evening.

The most amazing part of the play is the musical talent all the actors have. Not only do they act, but they sing and play instruments. It's incredible.

I can see why ONCE was awarded the 2012 Tony Award for “Best Musical”!

I want to go again and take Elli - I know she will love it.

The play will be at the Gateway for just a few weeks. Don't miss out on your chance to see it. 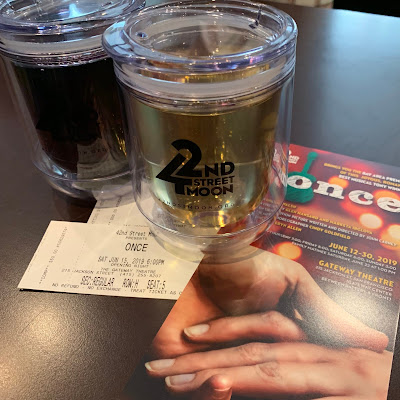 42nd Street Moon’s production of ONCE is directed and choreographed by Cindy Goldfield, with music direction by Eryn Allen (Moon debut). The cast will accompany themselves on instruments. The cast of ONCE will feature Emma Berman as “Ivonka,” Matt Davis as “Bank Manager,” Jake Gale as “Švec,” Devin Renée Kelly as “Réza,” Corbin Mayer as “Guy,” Brady Morales Woolery* as “Andrej,” Ariela Morgenstern* as “Baruška,” Bryan Munar as “Eamon,” Olivia Nice* as “Girl,” Christina Owens as “Ex-Girlfriend,” Rob Ready as “Billy,” Colin Thomson* as “Da” and Myra Chachkin as “Emcee.” With the exception of Colin Thomson* - recently seen in in the title role in 42nd Street Moon’s FIORELLO! – all cast members are making their Moon debuts!

In addition to Ms. Goldfield (who will also be serving as Costume Designer) and Ms. Allen, the creative team will include Michael Palumbo as Lighting Designer, Brian Watson as Scenic Designer, Travis Rexroat as Sound Designer/Mic Operator, Lauren Howry* as Assistant Stage Manager and Alicia Lerner* as Stage Manager.

“A love affair with music” – The New York Times

Based on the 2007 movie, ONCE tells of an Irish musician who learns to love and dream again through a fateful week with a Czech immigrant. Heart-breakingly romantic but also bursting with joy and humor ONCE features a lively folk score - with the onstage actors playing their own instruments - and is the only score to have won an Oscar, Grammy, Tony, and Olivier Award. ONCE demonstrates the power that music has to connect us all.

“ONCE is the kind of show that gets inside you and rattles you with recognition,” said Director Cindy Goldfield. “In addition to the themes of immigration and cross-cultural migration, we watch the two characters connect and find a shared passion and sensibility, and while doing so, we remember our own version of this universal heartache. This is driven home by the presence, witnessing and participation of the ensemble. Not only are they there to create the gorgeous sound and add the various characters that populate the world of the play, but they are also an intrinsic part of the experience....while the actors themselves experience the recognition of just missing out on the ‘real thing.’ As John Carney (the director of the original source material film of the same name which stars the composers of the music, Glen Hansard and Markéta Irglova) commented, “It’s the ones who are gone who haunt you for the rest of your life. Instead of saying, ‘I love you’ or ‘I miss you,’ they just disappear.”

ONCE runs about two hours and fifteen minutes, including one intermission.
Posted by Kris Mulkey 1 comment: