From the archives. This was originally posted in 2011. 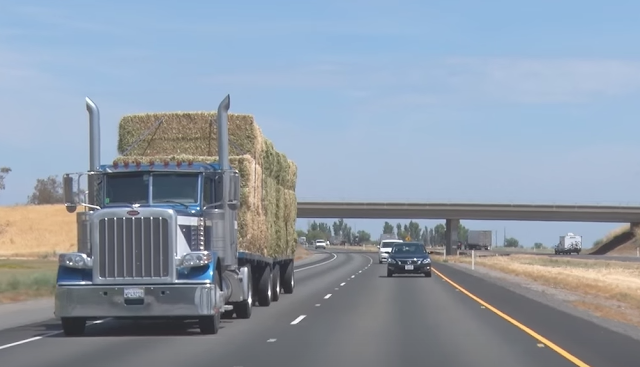 Have you ever heard of making a wish on moving hay?

When I was a kid, anytime we saw a truck full of hay we would make a wish. You had to follow a few rules in order for your wish to come true.

1) lick the end of your thumb, hold it up, and let it dry as you made your wish
2) make the wish and don't look back until you're sure the truck is out of sight

I grew up with this crazy myth. I thought everyone did it. My mom was so enthusiastic about it I just assumed it was a natural method of making wishes. Kind of like carrying a rabbit's foot in your pocket. Or throwing a penny in a fountain.

But apparently that is not the case.

On Monday we saw two huge semi's full of hay rolling down the road in Napa. This was too good to resist so I made a wish. I can tell you what I wished because it already came true.

I wished that someone would call me about a job.

One hour later I got a call from a headhunter, then a Human Resources manager a few hours later. The next day I got two more calls. Then one more call yesterday.

So I tweeted about it. Cuz that's what I do when I get excited about something. I tell everyone. I can never keep my mouth shut.

One of my followers who grew up surrounded by farmland was bummed that she didn't know about this when she was little.

And then nine people un-followed me.

Holy cow. Really? Just because I wish on hay (and tweet about it.) Ouch.

I haven't had this much action in my job search since I started 3 months ago. So it was pretty exciting.

My brother says I got the calls because there's a full moon and yada yada. My husband just rolls his eyes. Elli believes in the magic of hay. I do too. She is also worried I'm going to jinx myself writing this story. Great.

It's just a myth. I sent my resume to all these people. It's just a coincidence they all decided to call me after I made my wish.

Oh, and just so you know, I Googled "make a wish on moving hay" and "wish on hay."  And I found nuthin. Not one thing. So guess what you'll find now if you Google it. That's right. Me. Ha.

So, I have to ask "Mom, where did you come up with this outrageous gag? It's time to spill the beans.

*Thank you Mike Lowrie Trucking and their Big Rig Video for the hay image.
Posted by Kris Mulkey

Email ThisBlogThis!Share to TwitterShare to FacebookShare to Pinterest
Labels: a day in the life