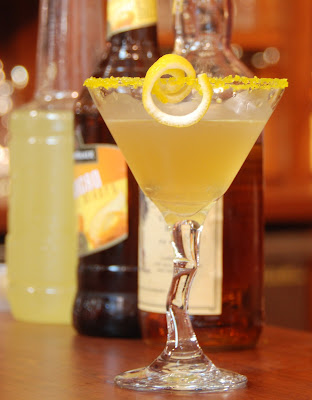 Living in San Francisco you're introduced to all kinds of cool things - including interesting, and tasty, cocktails! Who can pass up one called the Cable Car! It's the signature drink from celeb bartender Tony Abou-Ganim.

The Cable Car is Tony's signature cocktail which he created in 1996 as a signature cocktail for the Starlight Room, a stunning nightclub and cocktail lounge atop the historic Sir Francis Drake Hotel in San Francisco. Its name comes from the geographic location of its house of origin … One of the city’s landmark properties, the Sir Francis Drake is located along the world famous Nob Hill cable car tracks, and its Starlight Room is affectionately referred to as the lounge that can be found “between the stars and the cable cars.”

Hint: To sugar-cinnamon frost a cocktail glass, first chill the glass, rub the rim’s circumference approximately ¾ inch in depth with a lemon wedge, then dip into a bowl of superfine sugar – (regular granulated sugar does not adhere as well).