Elli really wanted an iPad so Don made a deal with her. If she could save half the money ($350) then he would pitch in the other half and they would get it together.

Elli has worked for months cat sitting for different neighbors to save the money. She charges $5 a visit. Most people ask her to come 2x a day, so she makes $10/day. She finally reached her goal and was chomping at the bit to get that iPad.

Don was hesitating. He didn't want to buy the iPad2 and have the iPad3 come out the next week. He finally gave in and ordered it.

Elli was beyond excited. She went crazy. 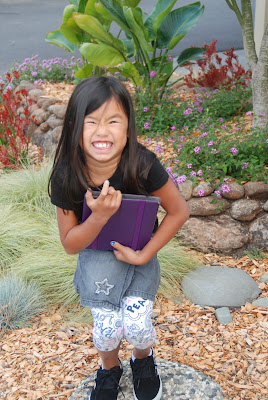 They picked out a cool purple cover and have been downloading and exploring all the fun their new iPad has to offer. She has loaded all her favorite games and swears she's going to load some new books to read. I may just have to order those for her. Just to make sure.

I must say, I'm pretty proud of her for saving $350. That's pretty impressive for a nine year old.

She has continued to cat sit and is now saving to buy paint for her room, and the Hogwarts Lego set which is $149.

It's a good thing someone is earning money around here!

Maybe I should start cat sitting. It's a pretty good gig.
Posted by Kris Mulkey

Email ThisBlogThis!Share to TwitterShare to FacebookShare to Pinterest
Labels: a day in the life, electronics, Elli, ipad