Elli gave me this cookbook for Christmas.

She went to the book fair at her school right before Christmas and saw two books that she wanted to buy for me and Don.

She got Don the book "Earth" that Jon Stewart wrote. She knows how much he likes Jon Stewart and thought this was the perfect gift for him. She could not wait until Christmas when he could open the book. It was really cute.

She picked out the new Tyler Florence cookbook for me. Tyler lives in Mill Valley and has a shop here. So she thought I would like it. And she's right. It was an incredibly thoughtful gift.

I think she's going to grow up to be a thoughtful gift giver like her daddy.

So over the next few months I'll be trying out some of his recipes. Don will be happy. He's got recipes like chicken fried steak, chicken and dumplings, gravy - real southern favorites that I've never made, that Don will love. 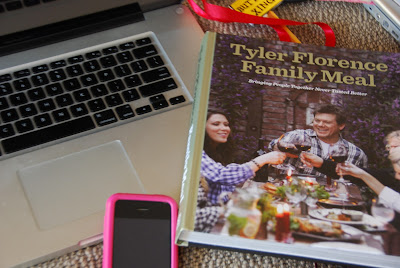 The interesting thing about this cookbook is all the stories he incorporates and recipes from his neighbors, too. He likes to host pot luck dinners with his neighbors. It looks really fun. And they can cook. I wished he lived in my neighborhood. I would love that.

Good thing I don't know where he lives exactly. I remember when I was in 12th grade. My friend Marsha and I took up jogging (for about a week) so we could jog in front of Robert Redford's house in Weston hoping for a peek. We never even saw a car in the driveway so we gave up jogging. Dumb girls.

Back to Tyler. And his book. It has beautiful food photography.  And pretty much has only one recipe per spread. I like books like that. It's easy to see what the food should look like so you can measure how you did.

So looks like I have some cooking to do.

Sorry I bored all of you with gobs of recipes between Christmas and New Years. I was working on a HUGE recipe project and had to get a bunch of stuff posted. It's a top secret project right now. I'll fill you in soon though. And no it's not a cookbook or anything like that. I'm a recipe follower, not a creator, remember?

I read someone's tweet the other day ranting about people calling themselves "Chef" or "Sommelier" when they hadn't worked in a restaurant with that title. I'm not claiming to be a chef. But I was head pizza maker at Mazzio's Pizza in Plano, Texas when I was in 11th grade. Does that count? Kidding. I don't want to be a chef. That is sweaty hard work. No way. I just want to be able to cook (almost) restaurant quality food at home.
Posted by Kris Mulkey