Life without your dog is not the same.

Our 16 1/2 year old dog passed away on Sunday. We knew it was coming. We'd already had two false alarms over the past 18 months where we said our good bye's and my husband took her to the vet only to bring her home alive and well. 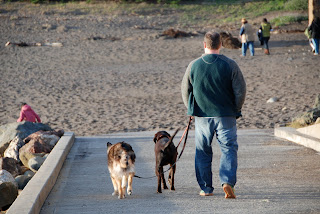 This time was different. She started fading away about a week before she actually died. She stopped eating. She didn't want to go outside. Then she could barely stand. We knew it was serious when we pet her and there was no reaction. No ears twitching or tail wagging. It was almost as if she was gone already.

We were really hoping she would go peacefully in her sleep. Because making the decision to have her put down is excruciating. We'd done it before with our cat Beaner and kept second guessing our decision.

Kahlua still had a twinkle in her eye and the will "to be" for such a long time, but now it was different. The twinkle was gone, and she just seemed ready to go. 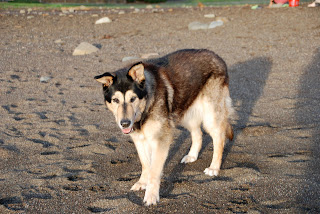 On Sunday night we all kissed her goodnight and told her we loved her  - and she died that night. On her own terms, in her own way.

I knew when I woke up Monday morning that she was gone. She wasn't upstairs as usual. And the jingle of her collar wasn't there when I walked downstairs. All I heard was silence. I stared at her for a long time to see if she was breathing. And then I knew. She was gone.

The house is weird without her. We've moved her bed from the hall and it seems so empty. I know we'll get used to life without her. But it's not the same. Now don't get me wrong. She made me crazy the first 7 years of her life. She and her brother Bailey were so wild and carefree. And she barked at everyone. She wasn't perfect. But in the last 6 or so years she was so sweet and gentle.

And I'm not even the big dog lover in the house. Don really loved the dogs. He picked out Kahlua and her brother Bailey on a trip to the pet store to buy CAT FOOD. He really wanted a dog, and these two just spoke to him. He was devastated when Bailey died suddenly in 2006. They were buds.

In 2009 we got Sam, a chocolate lab from the Golden Gate Lab Rescue here in SF.  He and Sam have a special bond. Sam is like Don's shadow. Don is a lot like Dr. Doolittle. Animals just gravitate to him. He has that sense about him. Like the animals, he's sweet, gentle and kind.

So it is with a heavy heart that we say goodbye to Kahlua. We'll miss you terribly. And we hope that wherever you are you are having a grand time with Bailey herding all the other pups just like you did when you were a youngster. Or maybe your second life is on a farm herding sheep. Wouldn't that be grand?
Posted by Kris Mulkey