What's for dinner? How about Sloppy Joe's in a lettuce wrap - with an Asian twist. Invented by yours truly.

Here is why I will probably never have a future in recipe creation. I think I have a good idea. And I probably do. But it's all in the execution. But I'm sure stuff like this happens with people that create recipes all the time. In fact, it's probably how a lot of things get discovered.

Here's what happened. I had some ground turkey to use for dinner. There are three things I typically make with ground turkey, 1) spaghetti sauce 2) turkey meatballs and 3) turkey tacos. I thought I would branch out and make lettuce wraps with ground turkey. Sounds like a good idea, right? And to make it even easier and FASTER, I decided to use a sauce I have from Trader Joe's called General Tsao's sauce. 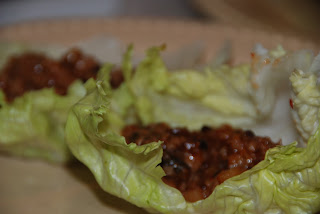 Well, I've never used this sauce before, cuz if I had, I wouldn't have used it in the lettuce wraps. The sauce is sweet and spicy with flavors of sesame oil and rice vinegar - - and tastes just like sloppy joe if someone from China had invented it!

They tasted good, but were way too sweet for my tastes. Elli loved it - she said it was like dessert for dinner. She even had one in her lunchbox the next day!

The next time I have ground turkey meat, which is often, I'm going to try again - using a real recipe this time. Cuz lettuce wraps are tasty and healthy for you.

My recipe inventions didn't stop there on this particular Sunday evening. I was reading the current issue of Food and Wine magazine, while the meat was simmering on the stove, when I came across a dumpling recipe that looked awesome. I didn't have the stuff to make dumplings, but I did have wonton wrappers and turkey meatballs in the freezer. So I sprang into action and made turkey wontons served with the dipping sauce from the magazine. These actually tasted good! 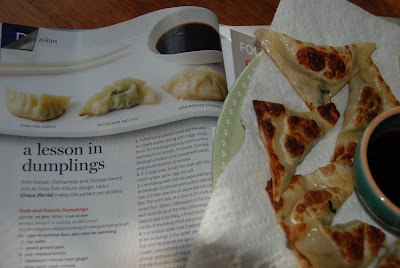 Whisk ingredients together. Or, if you're like me. Combine all ingredients in a small jar and shake it up. You can make your own dumplings. Or buy the frozen dumplings at Trader Joe's. They rock.

Does anyone else do this? Is it just me?

Don always looks at me like I'm from another planet. Although I must say he ate most of the wontons. AND this was a good invention. The turkey meatball was perfect for a dumpling filling. They tasted just like the filling you get in a Chinese restaurant! Well, ok, maybe not EXACTLY, but pretty darn close and mighty tasty for something I literally threw together on a whim.

My energy in the kitchen didn't stop there. I know. There's seriously something wrong with me. After dinner I made the banana chocolate chip muffins which were in the magazine too. Only I think I may have had one too many glasses of wine at this point in the evening 'cuz I poured in 3/4 of the bag of mini chips when I was only supposed to pour in 1 cup. Needless to say, the muffins are VERY chocolatey.

I stopped there. All of a sudden I was really tired! I had absolutely exhausted myself and still had to watch The Apprentice - my current Sunday night "must see tv."  (Can you believe what happened to Bret Michaels. Yowzer.)

As I sit here typing this I realize maybe I shouldn't have eaten one of those banana muffins right before typing. My brain is flying from all the sugar!! And they say sugar doesn't affect people. HA. They've never been with kids at the Giants game after eating cotton candy.
Posted by Kris Mulkey