I've been reading about all these fall recipes which call for Butternut Squash, so I decided to buy one. I then had to search for a recipe to make. I decided on a soup that was on the Smitten Kitchen blog called Winter Squash Soup with Gruyere Croutons.

I took her advice and roasted the butternut and acorn squash first then I made the rest of the recipe. It was very simple to make. But of course I still made a huge mess in the kitchen. I really amaze myself sometimes. Even when I had my super duper huge kitchen I made a huge mess. It doesn't really matter - but it can get annoying. Especially to me since I'm the one cleaning it all up.

After everything has simmered you are supposed to blend the soup in a blender to get it all pureed. We don't have a blender anymore so I used my little blender wand thingy. We got it as a wedding gift. It's practically an antique now, but still works like a charm. Then to get it even smoother I pushed the soup through a strainer before I served it so it was nice and smooth. Plus there were a lot of thyme bits I wanted to get rid of.  It took a lot of pushing and squishing. But I finally finished.

Then, just before you serve it, drizzle a little heavy cream on top. Oh yeah. Yumalish. As I was eating it I thought of how I could have whipped the cream and added a pretty dollop to each bowl which would then melt in. 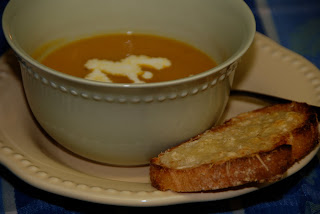 The verdict? The soup tasted good. The gruyere cheese toasts were divine. I'm not sure I'll make the soup again, though. There was nothing wrong with it, it just didn't make me go crazy. Like say the chicken enchiladas did. purrrrrrrrrr

And I'm ok with that. Maybe I'll just whip some cream and skip the soup. But that's the kind of thing that makes a girl gain 5 pounds. So I better not.