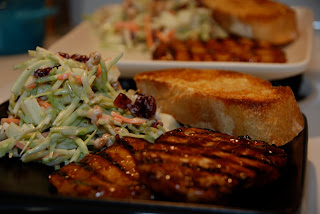 I decided to keep it simple last night. I've been killing myself making dinner lately. I race home, frantically make dinner, eat it in 2 secs, help my daughter with her homework, put her to bed then crash on the bed in an exhaustive heap. Finally I asked myself "Why are you doing this?" No one is asking me to do this. My husband is relaxing on the chair with a cocktail. And I'm running around like a crazy person.

I've decided to try and lighten up a little.

So last night we had BBQ pork chops which consists of slathering pork chops in BBQ sauce. I dug through the pantry and found Trader Joe's BBQ Sauce (Smokey Sweet with just the right amount of kick.) It doesn't get much easier than that. Then you grill them. I had some super thin chops so I grilled them 2 minutes on each side. That's it. Take 'em off the grill and let them rest wrapped in foil for a few minutes before you serve them. 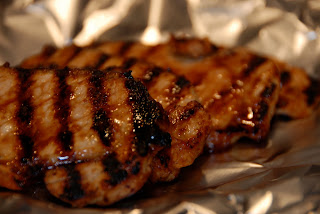 For the slaw I tried Trader Joe's Broccoli Slaw. I followed the recipe on the back of the package. You add 1/4 cup dried cranberries, 1/4 cup walnuts chopped, 1 cup granny smith apple peeled and diced and 1 cup of slaw dressing. I use Marie's Coleslaw dressing. It is the best. I make the worst slaw dressing, so I stick with Marie's. Everyone loves it and they think I made it from scratch. Love that. (Hint: Make this first and let it sit in the fridge for a few minutes.)

The final part is some Texas Toast.  Which is basically thick sliced bread with some butter and garlic salt toasted. I added some Gruyere cheese. That's it. Dinner is served. Very little mess. I'm not stressed out. And it was quite delish.

The only eye roll I got from the mister was when I asked him to be careful not to scratch the new plate with the steak knife. The plate is new. He's a boy. He doesn't care about these things. Plus he just finished telling me a story about how his bookkeeper ran over the camera with her car - because he dropped it in the parking lot and didn't notice. Amazingly, it still works. But I'm sure he has his eye on a new gadget. Cuz that's the way he rolls.

Holy cow, I forgot about the wine. I had a glass of La Olma Old Vine Zinfandel. Ok, I had two. It was delish. And all gone now.