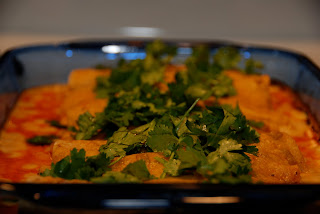 This past Monday I was reading Ree Drummond's blog, The Pioneer Woman, she had posted a recipe for White Chicken Enchiladas that looked so good. I knew I had to make them that night. It didn't matter that my day was going to be nuts and that I probably wouldn't be home until 6ish. I was going to make these.


Amazingly, I had most of the ingredients on hand. I just had to pick up a few things - fresh cilantro, sour cream and peppers to roast.


So when I got home I kicked it into gear.  Peppers were immediately placed in the toaster oven to roast. I  cooked chicken breasts in a pan. Chopped onion and some carrots, grated cheese, softened tortillas, made the sauce -it was frickin chaos in my teeny tiny kitchen. It seriously looked like a taco truck had a run in with ....another taco truck.

Now I will admit, about halfway through I thought to myself "Why am I doing this?" But at that point it was too late to turn back.

Anyhow, I finally got it all put together and in the oven. But not before Elli and I gave everything a taste test. Ooooooh it all tasted so good. The white sauce with sour cream and cheese. Oh yeah.

I was so wiped out from the speed cooking I didn't even make anything to go with the enchiladas. No rice. No salad. No beans. Nothin'. And you know what? It was fine. The enchilada's were really good and filling. We really didn't need anything else. 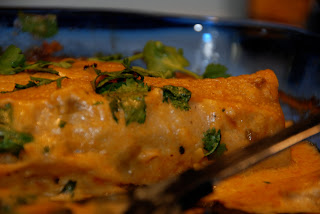 So I highly recommend you skip on over to Ree's blog and print this recipe so you can make it immediately. Because even Mr. Mulkey was impressed. "Where did you get the recipe?" he asked. "Ree" I said. "Who is Ree" he said. "She's the Pioneer Woman! You know, the lady from Oklahoma that I saw at BlogHerFood......" he pretty much tuned me out here. Anyway, Ree has a new fan now. He won't read her blog. But he sure will enjoy the recipes.