When I grow up I want to be.....a Professional Food Taster. Is that a job? Part critic. Part chef. Part foodologist.  I don't know what I'm talking about. All I know is that I love tasting food. And I love giving my opinion. And the job I have imagined in my head would be really fun. Sort of like being a wine taster (another one of my dream jobs.)

I got a taste of a job like this a few times (literally). I worked in corporate marketing  for Einstein Bros Bagels for five years. And I worked in the marketing department for Houlihan's Restaurants for 3 years.


I loved both jobs. But with Houlihan's I was part of the team that worked on the new branding and new menu. It was a great job. I flew to Kansas City every week to go to the corporate office. One of my favorite things was tasting the new recipes from the test kitchen. I could sit there all day eating food and telling the chefs what I think.  We also got to create yummy cocktails. But I'll save that for another day. 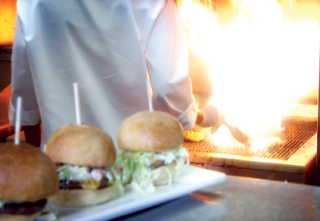 Believe it or not, there were people in our office that really didn't like doing this at all. They dreaded it. They fell into three categories - 1) picky eaters, 2) total germaphobes, 3) dieters. For me, trying new food is fun and unless a person is totally disgusting, smelly and drooling with sores - (ick!!) I don't have a problem sharing food. Fortunately, I don't hang out with drooling icky people, so I'm pretty safe.


Anyway, I could have hung out there all day. In 2002, we revamped the whole Houlihan's menu. Creating a new menu is really fun. But incredibly hard work. Not only does the food have to taste amazing. But the chefs in all the restaurants have to duplicate it exactly. And all of Houlihan's food is home-made. No thaw and serve products. Even the chicken fingers are hand breaded. Which is why they taste so scrumptious.


One of the new app. recipes we* created was a chicken wing recipe with a Thai Chile Glaze and Sesame Dipping Sauce.  It's still on the menu. And it's to-die-for-delicious. It sort of makes me think I should have gone to culinary school so I could learn to create delicious stuff like this. I'm sure Don would agree, since I'm definitely still a "work-in-progress" in the kitchen.

*Now, let me clarify.  When I say "we" I don't mean me specifically. I was on the team. I didn't come up with the menu or recipes. I was purely a taster - and not an official one at that. Just a committee member.)

Way back when, when I was 17, I worked in a Nabisco test kitchen as a Temp - for 5 days. (It was a temporary, temp job!) I was in the lab/kitchen helping to create an egg product that they planned to sell in the freezer section of groceries - for you to heat in the toaster. (I have now officially aged myself. This was right when microwaves were coming to market.) I remember thinking the egg patty had too much onion, so of course I told them what I thought. We played with the recipe. It was really fun. I have no idea if that product ever went to market. Probably not. Egg in a toaster? I don't think so.


Anyhow, I got to think about cooking as a career after we watched the movie Julie and Julia. In the movie, Julia Child is complaining to her husband that she needs something to do. He asks her, "Well, what do you like to do?" Her response?  "I like to eat!"