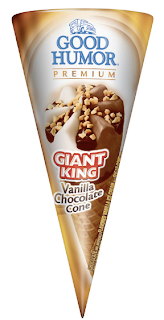 I forgot how creamy and delicious Good Humor ice cream is. Have you had one lately? Ya gotta go try one. It's seriously good stuff.
Elli and I were in Toys R Us buying a birthday gift and she asked if she could have some ice cream. Going to a toy store with a kid to buy a birthday gift - for someone else is my least favorite thing to do. You get the sad eyes, the begging, pokey walking, it makes me crazy. So I made her a deal. I would buy her an ice cream - if she didn't beg for everything in the store. This seriously worked. She focused on the gift we were buying and her reward at the end. Great! I love it when a plan works.
We get to the little reach-in freezer at the register and she stared at all the ice cream treats - for a really long time. This was a big decision.  After much (and I mean much) debate, she picked the large ice cream cone - the King Cone. There was a small one too - but my gal picked the big one. (It reminded me of my brothers when we were little. When given the chance to pick anything you want you should ALWAYS pick the biggest thing. No matter what. ) Anyway, the cone had chocolate and vanilla ice cream with milk chocolate and peanuts on top.
Of course after a few bites it was way too much for her to handle and she gave it to me. It was melting everywhere. She had chocolate ice cream all over her face, including her nose. Miraculously, she didn't get any on her clothes or the car. I have no idea how she managed that. She handed it to me and within seconds some had dripped on my shorts.
So I started eating the goopy mess. And OMG was it good. The ice cream tasted like it had been whipped with whip cream. It was vanilla and chocolate and it was really delicious. I have to go get another one sometime so I can eat the whole thing. Including the crunchy milk chocolate and peanut topping. mmmmmmmm mmmm
Posted by Kris Mulkey

Email ThisBlogThis!Share to TwitterShare to FacebookShare to Pinterest
Labels: dessert