Everyone needs a good laugh once in a while 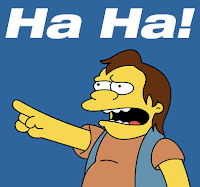 Email ThisBlogThis!Share to TwitterShare to FacebookShare to Pinterest
Labels: joke