Lunch at the Oxbow Market in Napa 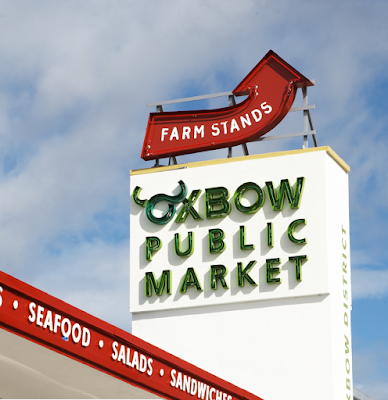 I stopped by the Oxbow market in Napa on Friday to pick up some lunch. This is a regular occurrence for a lot of people judging by the crowd. But not for me, I'm a cheapskate when it comes to lunch. I would rather brown bag it and eat left-overs so I can spend my money later on dinner and good wine.

But last Friday was different, I had a meeting in Concord that was ending right before lunch. I wasn't sure what the lunch situation would be so I didn't pack a lunch. As it turned out there was no group lunch planned so I left the meeting and headed to Napa. 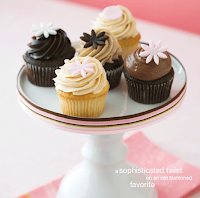 The Oxbow market is only about a mile from our store so I thought it would be a good place to stop. The last time I was there they had just opened and most of the restaurants weren't there yet so I was looking forward to seeing how it had evolved. I started imagining all the food and smells - freshly ground coffee, burgers on the grill, hot soups, taquerias, home-made pizzas, cured meats, olive oil, and cheese, fresh seafood from the oyster bar and cupcakes from Kara's Cupcakes. I could smell it all in my head. I'm pretty sure I ate a cupcake in my head too. They are soooooo good.

Once inside, the space reminded me of a fancy barn. There is a lot of wood and metal, with rustic yet very stylish finishes. Most of the restaurants are set up along the perimeter, like barn stalls. I started wandering around mentally taking inventory of my lunch choices. As I rounded the corner by the Oyster Bar I saw someone I recognized out of the corner of my eye. As I got closer I realized it wasn't anyone I knew, it was Chef Michael Chiarello!

I could feel my face get flush, and I'm sure I looked like a dork, as I walked past him trying to be non-chalant and cool. My immediate thought was "I have to Tweet this!" I'm a huge fan of Iron Chef and he's on the current series Next Iron Chef which I watch every week.

And then I thought, my tweet would be way better with a picture. I held my phone up in his direction to take the picture when he looked right at me. I wasn't expecting to make eye contact. It freaked me out.

I immediately walked away - without getting the shot. I totally chickened out! I felt guilty and weird about semi-stalking him in Oxbow. I glanced back and and he had walked the other direction. Then I saw him again as I rounded the next corner. He was with his wife and kids. The poor guy was just trying to have lunch with his family. He didn't need dorks like me taking his picture.

I quickly ordered a pre-packaged salad from the closest restaurant, which was Pica Pica Maize. I felt oddly stalkerish hovering over my phone while I tweeted that I saw him. (No mention of the wife or kids, just that I saw him.)

No real harm done I guess. It is a public place.

Oh, and my lunch? It was awesome. The restaurant, Pica Pica Maize specializes in Venezuelan food. I got the best salad for just five bucks! It was full of fresh ingredients like jicama, roasted corn, peppers, and organic greens. I loved it. I will definitely go back for another one. Especially since it was so cheap! Of course I'll also be on high alert for more celebs. You just never know....