I don't know about you, but pizza is a staple in our house. Especially on Friday night.

And back in the old days of me working for a living we would go out and eat pizza. But you know what? The stuff we make at home is better. So who needs waiters, and dishwashers, and bartenders. You can do it at home and pay the kids to help. Or you can dream that they would offer to help for free. Maybe your kids do that. Elli and Don? Not so much.

Yes, I just lumped Don in the kids category. He doesn't do dishes without whining either. He's allergic, remember? Breaks out in a terrible rash and hives. It's really awful. Or so he says. I don't know, it's too terrible to think of him suffering like that so he gets out of dish duty. He does doggy poop duty instead. It's probably a fair trade.

And yes Elli. THAT is an example of sarcasm. And, I probably shouldn't talk about "duty" and food in the same post. That's just gross. But what's done is done.

You can buy the pizza dough and all the fixins at Whole Foods or Trader Joe's. We like the Trader Joe's plain flavor the best. The wheat doesn't rise as nice. And I think the herb version is a bit odd in flavor. Both stores sell raw dough in the bag that's really good. You'll find it near the refrigerated prepared foods and cheese.

You do need to let the dough rest about 30 minutes on the counter before you shape it. Just flour a cutting board, take it out of the bag, and let it sit there while you enjoy a glass of wine. 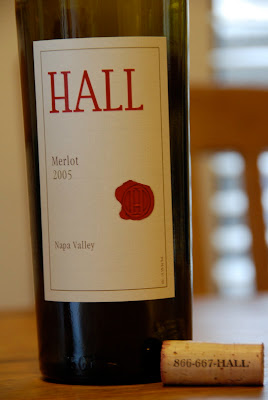 The key to a crisp crust is baking it in the oven for 3 minutes then topping it and baking it again. You can even make the pizza on the grill. Just brush it with some olive oil, grill it on one side, flip it over and add the toppings. That's really yummy too.

Now let's go have another glass of wine.

Email ThisBlogThis!Share to TwitterShare to FacebookShare to Pinterest
Labels: pizza