The big race is this weekend

Don's very first half marathon is this Sunday. He's running in the Avenue of the Giants race in Humboldt County. I've never been there. But the giants they are referring to are not from Where The Wild Things Are. They are trees. Very big, very old redwood trees.

It's going to be really beautiful. The perfect place for Don's first marathon. 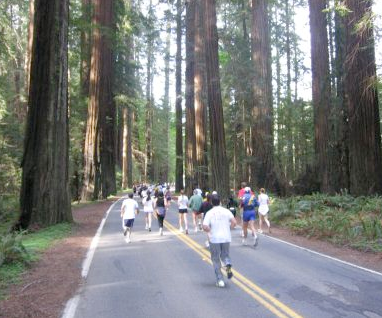 The big send-off dinner was last night. And guess who won the MVP award out of the group. The person voted to have the Best Shoes, Most Improved and Most Committed. It was DON! Everyone clapped and told stories about how impressed they were with him.

When he started running three months ago he couldn't even run one lap around the track.

He came home really bummed and was doubting if he could do it.

Then he started attending the Team-in-Training sessions and meeting the honorees and he was hooked. Plus he wasn't just running for himself. He was running for Mike. Our brother-in-law who was in the middle of chemo.

Now he's going to run a half marathon on Sunday. It's awesome. I'm so proud of him.

Email ThisBlogThis!Share to TwitterShare to FacebookShare to Pinterest
Labels: Don, team in training