Today I am doing something special. I'm helping promote a cookbook for blogger friend, Michelle Stern. 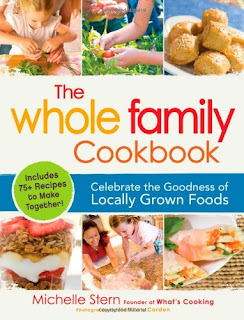 Her blog is called What's Cooking with Kids. Not to be confused with my What's Cooking blog. She's a chef. I'm a hacker. Her blog is all about teaching kids to eat healthy food by introducing them to locally grown fresh ingredients and then cooking together.

I really admire what Michelle is doing. 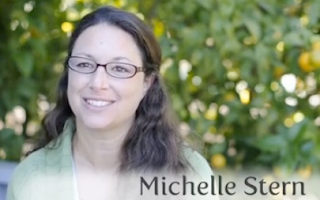 She flew to Washington D.C. to campaign for better food for kids in schools.

She's rallying her son's new school to have better food available for all the kids.

She's on a mission to get junk food out of our schools. She knows that eating healthy, yummy foods, makes for healthy happy kids. She's really trying to make a difference.

Here she is with her amazing family at their home. Oh, did I tell you she also lives here in the Bay Area?

The Whole Family Cookbook from Michelle Stern on Vimeo.

Her cookbook is full of delicious recipes the entire family will enjoy and can prepare together.

Here's a preview recipe of what you'll find in the cookbook.

Preheat oven to 450º
1. Melt 2 T butter.
2. In a medium-sized bowl, crack the eggs. Beat lightly. Add the melted butter.
3. Combine milk, 1 tablespoon sugar, vanilla, 1/4 t. ground cinnamon, salt and flour. Add to the eggs. Combine until well blended.
4. Heat the remaining 3 tablespoons butter in a 10-inch oven proof skillet. Add the sliced apples and cook until they are golden brown, 5 - 10 minutes.
5. Pour batter over the apples.
6. Combine 2 tablespoons granulated sugar and 1 tablespoon cinnamon and stir them together in a small bowl. Sprinkle the cinnamon sugar mixer over the batter.
7. Place the skillet into the oven and bake for 15-25 minutes until gently browned and puffed. Do not open the oven door. Or it will deflate!
8. Remove the skillet from the oven. Cut into wedges and serve immediately.

Ok. So now it's time for me to step into the confessional. Elli and I had a million things going on while I was preparing this recipe. She is trying to finish reading a book called The Westing Game. It has challenging vocabulary. Even for me. I was making dinner. And trying to shoot a video for Whole Foods. So I was a little distracted and somehow in all the chaos I kind of forgot to put the MILK in the batter.

I had already popped the pan in the oven when I noticed that the milk was still sitting on the counter. CRAP! I opened the oven to see if it was too late to mix it in. Yep. The batter was already starting to bake. Too late. Wah.

So I kept an eye on it in the oven. It was golden brown after about 10 minutes. 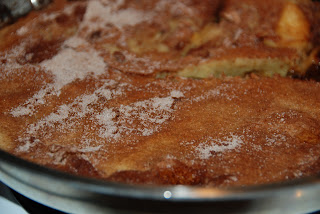 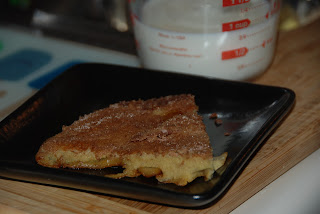 Guess what? I may have created a new recipe for Michelle. It tastes like an apple crepe and has the same consistency. Not exactly the Puff Pastry she intended. But the flavor is awesome and we gobbled most of it up within 10 minutes.

So imagine how yummy it must be WITH the milk.

I bought a big bag of Fuji apples so we'll definitely try again this weekend when I have a little more time and I'm not so frazzled.

Ok. Yes, I totally considered lying. I never promised a picture. But that's just not me. It would have been nice if I had another day to remake the darn thing. But of course I waited until the night before my deadline.

The book is available here