I need to go to blue jean therapy.

It's a girl thing. Shopping for blue jeans is almost as bad as shopping for a bathing suit. Seriously.

I was in Bloomingdale's once with Don and I casually mentioned that I wanted a new pair of jeans. He saw some cute jeans on a rack that weren't terribly expensive and suggested I try them on. Ok! Yeah. Let's do it. So I grabbed a few pairs in my size and off I went to the dressing room.

I immediately knew that I would NOT be buying a new pair of jeans that day. I could barely get my FOOT in the pant leg. The jeans were so skinny tight I'm not sure I could have fit my arm in them. Elli and Don were outside the dressing room asking if they can see. Uh. No. Definitely not coming out with my pants around my ankles.

Now this kind of thing can make me go from happy as a clam to wishing I were a clam and had a shell I could hide in. It usually leads me right to the shoe department. Because I know an 8 1/2 shoe is an 8 1/2. Dumb designers. I seriously unlike you a lot of the time.

So flash forward to last Tuesday. I'm talking to a good friend of mine on the east coast who is home because of all the snow and I'm home cuz I have nowhere else to go. When all of a sudden I hear a rip. The teeny tiny sound of fabric tearing. I look down and my very favorite jeans have worn so thin that the fabric has just given out. "Oh my gosh, I just tore my pants!" I tell her. "Crap. These are my favorite jeans!" I immediately blurt out "I'm not too fat for them, they're just worn out." What a paranoid weirdo.

Here's the deal, these were my favorite "butt looks good in them" jeans. So this is terrible. This is beyond terrible. It's flat out not fair. How can I justify buying a new pair of designer duds now? I immediately thought to myself that I'll fix them. I can patch them. That's what I'll do. So off I went to Joanne's to buy a patch.

Now, I'm kind of a jeans snob. I'll try to fix them before I buy a crappy pair of replacement jeans. I'm not the total snooty $400/pair snob. I'm the $150 a pair snob. But here's the thing. I have three pairs of jeans that I've paid that much for. And I've worn them for YEARS. Years. As in two pairs were bought in Connecticut and I haven't lived there in over five years. So I get my money's worth. Designer jeans made by Joe, James and Hudson just feel better and fit better. I've tried The Gap, Old Navy, etc. etc., and I've bought them. But I rarely wear them. They just don't fit the same. Or give your butt that "ooh la la" that we all want. Right, ladies? You know what I'm talking about. uh huh.

So since I was in a bit of a depression, and was going to Joanne's anyway, which just so happens to be across the street from the mall, I thought I would just see if Anthropologie or Nordstrom had any jeans on sale. I was seriously willing a pair of jeans to appear on the sale rack. I tried on a few with no luck. Before I left though, I decided to go back to the sale closet at Anthropologie one last time. And out of nowhere I found a pair of Joe's jeans in my size. On sale ($198 $79). {happy dance in the dressing room.} And they fit puuuurrfect. (Ok. The song "I'm Spoiled" by Joss Stone just came on the iPod. hmmmm We'll be ignoring that.)

Of course I immediately told the clerk my torn jeans story - since I still had them on. I just never know when to keep my mouth shut.

But suddenly all was right with the world. 'Cuz if I didn't buy them I wouldn't be able to sleep or concentrate on anything else. Weird. And slightly exaggerated. (And just a little bit sad.) But very true.

So here I am with Joe listening to the iPod playing Mama Mia and Dancing Queen and feeling like I'm the shit. (This is not a family blog, so I can say that.) 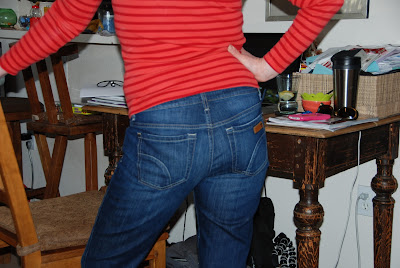 Ta da! I hope a song with a message that says I should buy a lottery ticket comes on next. Because I totally believe that if you dream it it will come. Right? Hey, the jeans, did! You never know......

PS. Do you have any idea how hard it is to take a picture of your own butt? Ha!
PSS. I believe in signs. Do you? I am not a brat. I swear.
PSSS. Now the song "Let Go" by Frou Frou came on. I'm starting to get a little weirded out. Listen here: