As in, "Oh no. Oli the parking attendant is gone. Fired."

"What? Who?" you're asking yourself.

Oli managed the parking garage where I park for work. I work in San Francisco where parking can be really challenging. I'm lucky I get to park my car in the same garage every day. It's in a condo building next door to my office. Most of the tenants work, so it frees up spaces for all the nearby businesses during the day.


Oli (pronounced Oh lee) knew exactly where every car should go. He piled them in. And treated them with TLC. He hardly ever took a day off and when he did it was never good. No one could park the cars with such efficiency. We were always happy when he was back.

And now he's gone and the parking garage is an unorganized mess. Cars are everywhere. They're piled in the wrong order. They're all over the place. It doesn't give you much comfort when you leave your car to someone creating such chaos. 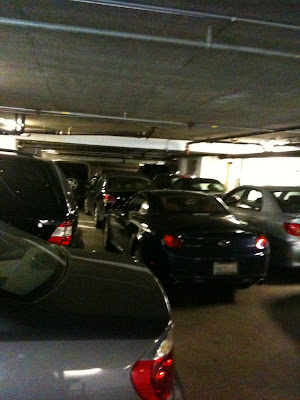 They say he helped himself to some of the cash. I don't know. Maybe it's true. But I find it hard to believe. He seemed to really like his job. And from my point of view, he did it really well.

When I first started here over four years ago Oli was a little mean. I didn't know his "rules." The only way to keep a busy parking garage organized like a puzzle is with rules. I needed a manual.

When he asks what time you're leaving he really wants to you tell him. Because that's how he figures out where all the cars go. And you better give him the heads up if you have to leave in the middle of the day. Or you can forget about getting your car out. He will force the "no in and out" rule on you if you don't communicate with him.  And when he says park in the middle row far left he meant far left. You better put your car as far to the left as humanly possible. Because he's going to squeeze three cars in there where you think it should fit two.

I quickly learned his rules and he was very pleasant to me after that. He always seemed to be friendly with the other customers and tenants too.

So it made me kind of sad to hear that he was gone. And that I didn't get to say goodbye.

I'll be gone from my job at H/L in a week or so anyway. But I'll get to say goodbye to everyone.

So Oli, if by some odd chance you happen to find my blog, "Good bye my friend. I wish you well. Elli says good bye, too."
Posted by Kris Mulkey