This is not one of those buy this product and we promise you'll never have to do dishes again.

But wouldn't THAT be awesome.

It's much simpler. And a teeny bit ridiculous that something so simple took three years to accomplish.

It has to do with my growing cookbook collection and the need to put them somewhere.

I used to have my cookbooks piled up in the kitchen on top of the microwave, and on top of our sideboard. It made me crazy how messy they were. I wanted a shelf. 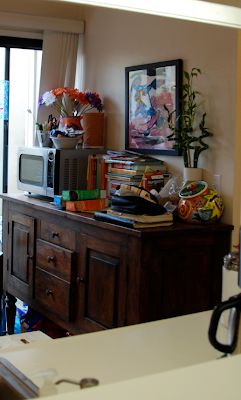 (This picture was taken a few years ago before they took over the top of the microwave.)

We looked for a shelf at West Elm. Didn't find one. But we did find a nice looking teeny weeny mantle for our fireplace. Great. What about my cookbooks?

I wanted one of those cool streamlined shelves that look really modern and seem-less. But Don insisted it wouldn't be strong enough for all the books. And he's right.

Finally I decided to see what I could find at the Container Store. I picked up a shelf that had a wire brace. But when we held it up to the wall it didn't look right. So I took it back to the Container store.

And another year passed by......and my cookbook collection continued to grow.

Finally a few Sunday's ago I decided that I was done waiting. So I grabbed some stuff we had stashed in a closet - a shelf, two brackets, and screws. It was supposed to be for Elli's closet. But since I high-jacked her closet we never installed it.

The shelf length is perfect and the brackets are strong enough. Don thinks there should be three brackets, I have two. I don't care. We're putting it up with two brackets. And before Don knows it he's drilling holes and installing my shelf. FINALLY. 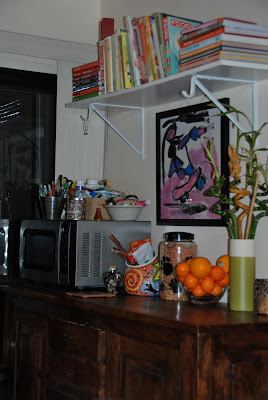 Let me tell you. It's awesome. I love, love, love it. I don't know why, but I feel like my kitchen is ten times bigger and the ceiling taller. Strange, I know. It's added height to the room somehow. And air below. Elli thinks I've gone a little cuckoo over my shelf.

Whatevs. I'm much happier in my our little kitchen space. It's amazing what a little shelf will do. And if I ever decide to make home-made spaghetti I can put a rod on the brackets and dry pasta. How 'bout that?
Posted by Kris Mulkey