What is the best gift you've ever given?

SWAGG is a free mobile app (download here) that lets you shop smarter using your mobile phone. Buy, send or swap SWAGG GIFTS and organize your old school plastic gift cards. For every download of the app between now and Dec. 31, 2010, SWAGG will donate $1 to Stand Up To Cancer (SU2C) , up to $125,000.


So, are you like me and you've done some shopping but not everything and now it's the weekend before Xmas and you're like, Holy Moly. What am I going to do? There's so much pressure to get just the right thing for all the special people in your life. It gets even harder when you're on a tight budget.

What's the best gift you've ever given? Is there one thing that really stands out?

I can recall numerous great gifts that I've received. But only a few that I've given that I would categorize as a "best gift ever given".  Mainly because I am married to the BEST GIFT GIVER EVER. He is. Hands down. The best. Ask my family.

I try really hard to be a really thoughtful gift giver. But I'm always trumped by Don. He always manages to outdo me. Mainly because he spends more than I do so my gift comes across as less spectacular. So that doesn't seem fair. He always goes for it. I'm a conservative shopper. I always wimp out.
So what have I, Kris Mulkey, given to someone that they would say is THE BEST GIFT EVER? How do you define the "best gift ever given" anyway? How do you know what the recipient thinks is the best gift?

I'm pretty sure the best gift I've ever given was to Elli.

She had been begging, and begging, to get her ears pierced. I told her when she was 13 and more responsible we would do it. She thought this was completely unfair and way too long to wait.  She would beg every few months. And I would tell her "No. You're too young."  Most of her friends did not have their ears pierced. And I don't think they really cared too much about it. Elli was obsessed though. And did not like the thought of waiting until she was 13 - at all. So for her 9th birthday last year I surprised her and I let her get her ears pierced.

I will never forget the look on her face when she opened the little box and read the special certificate I made. She couldn't believe it. It was the best moment ever. For her, it was like a dream come true. It was the ultimate, unexpected surprise.

We made it a very special experience by taking our time at Claire's and then having lunch at the restaurant of her choice. It was one of those days neither of us will ever forget. 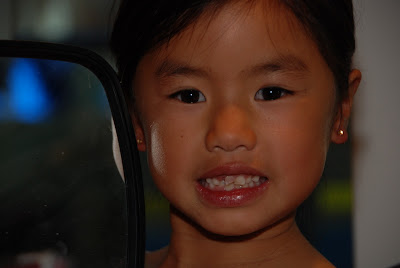 It's nice to be able to give someone something they REALLY want. Some people are easy (like Elli) she is very open with what she wants. Others are harder (like Don.) One of these days I'll give him a spectacular gift that will knock his socks off.  Probably won't be this Christmas. Unless I just happened to pick the right numbers on the Lottery Tickets. But maybe sometime soon. Wish me luck.

Don't forget to download the SWAGG app on your iphone. Stand Up to Cancer gets $1 for each download. And make sure you register for the awesome trip giveaway to Sundance. Park City is totally fun. You'll have a blast if you win.

Learn more about the coolest new app that revolutionizes the whole shopping, gifting, and gift card-organizing experience and Download the SWAGG app to your iPhone or Droid. I was selected for this sponsorship by Clever Girls Collective , which endorses Blog With Integrity.

THIS IS WHAT YOU COULD WIN!!!!

Clever Girls Collective and SWAGG are sending a lucky pair of movie fans to the Sundance Film Festival! The sweepstakes is offered exclusively through the Clever 1000, and it has a pretty kick butt prize, including: