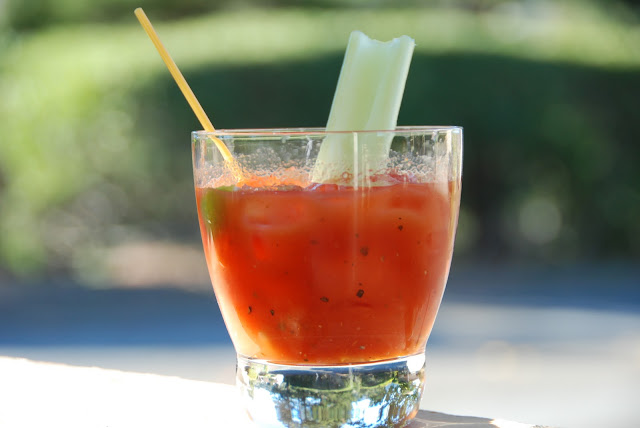 'Tis the season for a spicy Bloody Mary.

I don't know why we only drink these during the holidays. But it's kind of tradition. And I guess it would seem weird drinking them any other time.

My dad is usually the king mixer of this spicy cocktail. But since he's a million miles away Don has taken over the Bloody Mary making duties.

We like ours spicy, with a squeeze of lime and of course a stalk of celery. A nice olive is good too.

Are you a fan of Bloody Mary's? What's your secret ingredient? Care to share your recipe?

I must confess. After I wrote this I REALLY wanted a bloody mary. But sitting alone in your living room drinking a vodka cocktail just doesn't seem right. So I poured myself a glass of the mix, with a squeeze of lime and a skewer of olives and it hit the spot. aaaaaaaaaah

It's like having a snack and a drink all in one. Quite tasty!

Ok. I'm not exactly alone. Don and Bentley are sleeping on the couch and Elli is playing with a friend upstairs. I'm sure mommy drinking vodka during a playdate is frowned upon. So a virgin mary is definitely the right choice.  But all this talk about vodka....... just kidding. I'm really not a fan. Wine is my thing.

I'm leaving now. I'm starting to talk crazy. You're going to start thinking I really did dip into the vodka. I didn't. I'm just giddy for olives.
Posted by Kris Mulkey

Email ThisBlogThis!Share to TwitterShare to FacebookShare to Pinterest
Labels: cocktails