The nearly empty ship yards in Alameda is not where you would expect to find a winery. What you might expect to see is the crew from Myth Busters. But we didn't see them anywhere. And trust me. We looked. 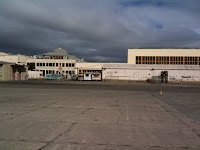 But the empty (kinda scary shipyards) is exactly where we found ourselves yesterday. We went to Rock Wall Wines to hear a band.

Don participated in something called the Closet Musician's Workshop the first year that we lived here. He loved it. He got to jam with a bunch of really talented "closet" musicians, like himself. At the end of the session they performed at a local bar. It was awesome. I felt like a groupie. And Don really loved playing guitar and singing on stage! The man that doesn't talk actually sang on stage. It was awesome. 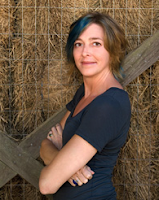 They had a lead singer of the group. Her name is Hilary. Hilary was really serious about becoming a real performer. She wasn't doing this just for fun. She had a voice coach. She called the group to her house in the Oakland Hills for extra practices. She had a much bigger goal for herself than playing at the now defunct Sweetwater Grill.

Flash forward 3+ years and she has a stage name now, Nell Robinson, and a real band. She has an album. She's performed on the Prairie Home Companion with Garrison Keeler. She is not a closet musician anymore. And she and her band are pretty good! You don't even have to like Bluegrass/country music to appreciate the talent of the musicians. But it's much more enjoyable if you do. Click here if you want to hear her with the Jaybirds.

So in addition to the fun music - we got to taste some pretty yummy wine. And since it is the middle of crush, we got to see them tending to the zinfandel grapes. Pretty cool.


Elli wanted to jump in the grape bin just like Lucy and Ethel. Of course she has NO IDEA who Lucy and Ethel are. But something about seeing that bin of grapes beckoned her to climb in! I didn't let her. But I did laugh when she asked.

So what did you do yesterday?
Posted by Kris Mulkey