Do cows need vacations? Yes, they do!

A funny thing happened when we were on a day trip to the coast last week. Three cows decided to take a little vacation from their pasture. Two ended up wandering Hwy 1 (in opposite directions) and one ended up on a jetty by Nick's Cove.

The cow was having the time of her life looking out onto the water. The rancher? Not so much. It was a sight to see. I wonder if this has ever happened to the Marlboro Man and the Pioneer Woman? Probably not. Especially since they live in Oklahoma. But you probably have no idea what I'm talking about.

Here she is enjoying the view. 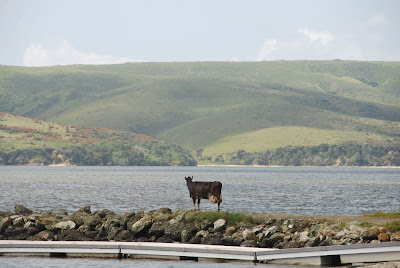 She's checking out the chaos behind her. The rancher and his helpers nearly drove their truck and trailer in the water. I think we saw her laughing. She REALLY didn't want to leave. 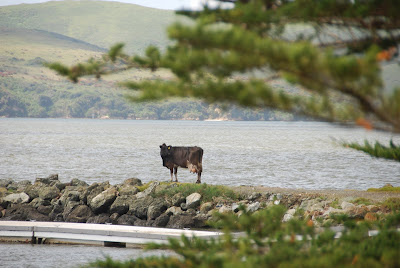 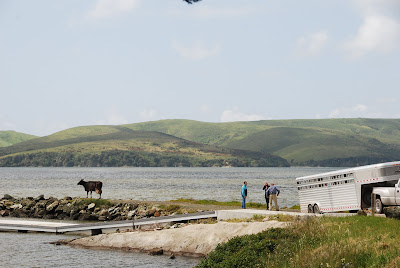 She was really enjoying the view. 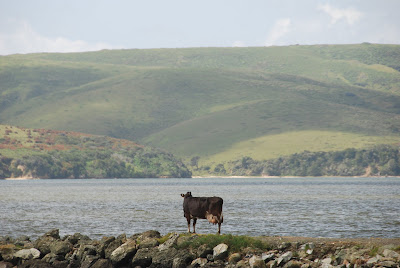 They finally got her in the trailer after many attempts. Don was thinking about lending them a hand. (ha) But Elli was starving. So we went in the restaurant instead. Just kidding. He was not as fascinated with the whole cow escaping to go on a little field trip event as Elli and I were. We would have stayed watching until they pulled the trailer away. Far, far away. Something about cows out on an adventure had us mesmerized. 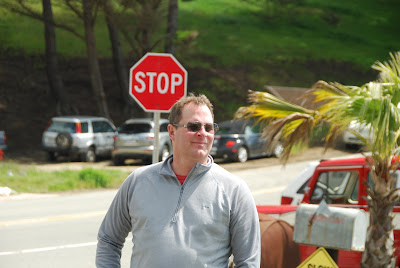 And yes, I believe the STOP sign behind Don's head is definitely a sign - that we needed to stop talking about cows! Ha. Didn't see this until the next day.

Next posts:  Review of our lunch at Nick's Cove and whale watching in Bodega Bay.
Posted by Kris Mulkey