The best Clam Chowder is at Nick's Cove in Tomales Bay.

We stopped for lunch at Nick's Cove in Tomales Bay. We'd heard about it, but had never been. It has been on the Top 100 Restaurants list in the Bay Area a few times (so I hear.)  So after the whole cow adventure we went inside for lunch.

The restaurant is dark and rustic on the inside. With an amazing round fireplace near the bar. The server led us to an enclosed patio where it was warm, sunny and very relaxing for a lazy afternoon.

First up bread and butter, topped with sea salt. Yum. We all devoured it. Elli stole all the salt.

Next up a cup of chowder. Oh my gosh. It was the most fantastic chowder I've ever had. The clams were so fresh and tender, the veggies just perfect, it had big chunks of bacon and the broth was light and creamy at the same time. (Elli also stole most of my soup.) And I was so enamored with it I forgot to take a picture. Trust me when I say it's a "must order item" at Nick's.

For lunch I ordered Crab Cakes off the Small Plates section of the menu. And the serving size was just perfect. Plus they were just crab - no other weird fillings or funny stuff. Pure, delicious, crab.

Don ordered the Crab Eggs Benedict and said it was the best he'd ever had.

Of course we also had a very nice glass of wine. I drank the Nick's Cove Pinot Grigio. It was light, crisp and very tasty, just as it should be. Plus, it was only six bucks a glass. And Don had something. I'm pretty sure it was a Chardonnay. Not sure what exactly. Frankly I wasn't paying attention. Elli and I couldn't stop talking about the cow or the soup. Yes, this is Don's life. Poor fella. 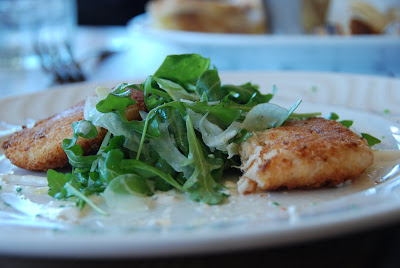 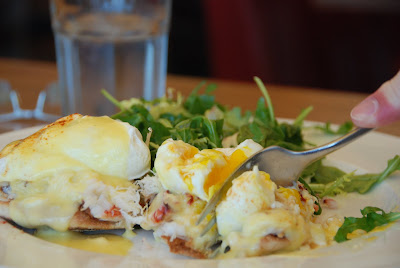 This is one of those places we'll definitely go back to. It's beautiful. It's relaxing. It has super yummy food. It's not stuffy. You can even rent a cottage and spend the weekend. They have kayaks and fishing boats. And it's only about 45 minutes from where we live. 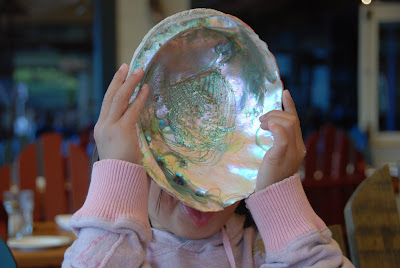 After lunch we walked down the pier. There is a little Bait Shack at the end of the pier. But it's not really a bait shack. It's another dining room and oyster bar where you can eat. How cool is that? 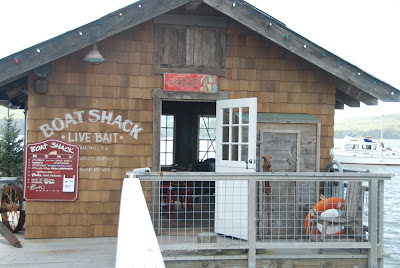 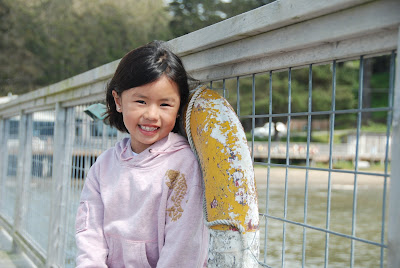 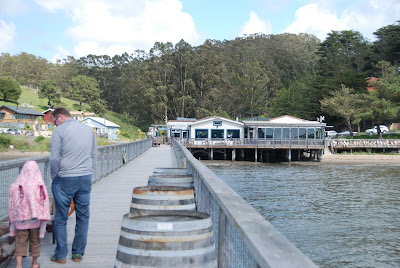 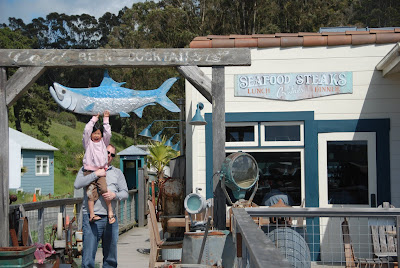 I don't know if I've told you guys, but we live in the MOST amazing place. It's truly one of the most beautiful places on earth. Our Spring Break "Stay-cation" was amazing. We didn't need to travel far to have fun or see amazing things. How lucky are we? 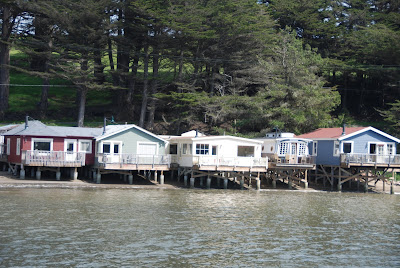