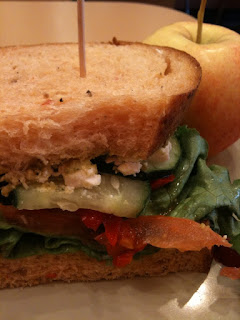 Trying to make the right choice for lunch when eating out is tough.

I ate lunch at Panera today. I thought I made a good choice. Then I found the nutrionals and it wasn't really the best choice.  I chose the Mediterranean Veggie sandwich and an apple. Sounds like a good choice, right? It looks healthy. But check out how much sodium and carbs were in this sandwich. Holy smokes.

I think I'm going to be sick to my stomach.

Next time I'll order a Classic Cafe Salad it only has 170 calories and 270 mg of sodium. Much better! I am shocked at how much sodium is in everything. It kind of makes me wonder how many calories and mg of sodium are in the things I eat - that aren't as healthy. Even the kids menu made my eyes pop. The kids grilled cheese had 300 calories and 890 mg of sodium.