I love fall and Pumpkin Bread 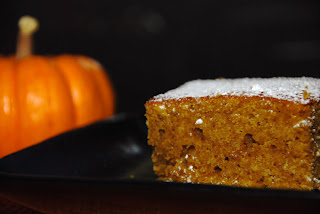 For me, nothing tastes more like fall than pumpkin bread. Or pumpkin bagels and cream cheese from Einstein Bros. Bagels or Noah's Bagels here in California. Their pumpkin cream cheese tastes just like pumpkin pie. I can taste it now.

So I made my first batch of pumpkin bread on Sunday. I always make a double batch so I can use the entire can of pumpkin. This time I bought the pumpkin puree from Trader Joe's and for some bizarre reason decided to bake it in a 9 x 12 pan. I don't know if it's the pan or the pumpkin. But it doesn't taste quite right. It's good. But I've had better.

Don't get me wrong, we're all eating it. And no one is complaining. Maybe it's just psychological. It should be a bread slice and it's not. It's square and looks like cake. But it's not cake. It's bread. Sort of.

Now I think it's just me going crazy. That is a very strong possibility. Maybe it's just time for a new recipe.