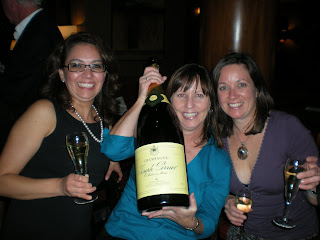 Last weekend I was in La La Land (Los Angeles) for a huge event for BevMo! We were opening their 100th store in Torrance. And I can say "we" because I was on the grand opening committee that met every other week for months, preparing for this opening.

We had a VIP party Thursday night to thank all the vendors and executives for helping BevMo! get to 100 stores. Here I am with Rocio and Amy (holding champagne) at an "after party" in the hotel. We made a pretty good dent in the big, honkin' bottle of champagne. Needless to say,  I felt like DEATH on Friday. Not good. But I marched on. With a really big headache. 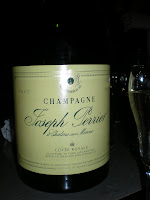 On Friday we opened the store. And stuffed 2,000 goody bags for the Saturday event. It took 6 hours to stuff the bags. AAAAHHH!

Finally on Saturday we had our Mega-Tasting event with over 100 winemakers, spirits, beer and food vendors. It was a huge undertaking. And I am happy to report it was hugely successful. We think we had about 1,500 people attend. I'll tell you more about it tomorrow.

Back to Friday night, a large group of about 40 people, were guests of Mozy, the owner of Exclusive Imports, for dinner at a Persian restaurant in Beverly Hills called Shah Abbas. The group in attendance were prestigious French winemakers that speak French, some of Mozy's colleagues, and a lot of BevMo! buyers, employees and my friend Wilfred. So as impressive as the French were, about all I could do was smile cuz I don't speak French and they don't really speak English.

Needless to say, the dinner was interesting. They served appetizers outside on a nice patio and did a blind tasting of white wine. Unfortunately I was still "under the weather/hungover" so I didn't drink any. We then moved inside where they continued the blind tasting with red wines and they served dinner - which oddly enough was the same chicken and beef that they were serving as appetizers. That was a first for me. I will say, the meat was very tender and delicious. But don't you think that's odd? They did the big reveal of the wines we tasted and they were some really expensive wines.

These are the most expensive wines I have ever tasted and probably will ever taste again. They are not really my style of wine. But wow. Thousand dollar bottles of wine.

This restaurant was big on entertainment. There was Tatiana from Russia. She sang a few songs accompanied by a recorded music track with sound effects and back-up singers. 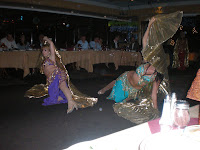 Then came the dancing. The DJ gave a big introduction that we would be entertained by world-class dancers in two sets. Wow. This sounded exciting. Then one girl came out. That's it. She danced once dance. Stepped aside grabbed a different prop and danced again. She did this 5 times with different props. Then she left. huh?

Then the young girls came out.  The older Frenchmen really liked these three. One was a brunette. But they had their eyes on the blonds. It was very funny. And very weird. There was a strange vibe. I was sitting next to two young Frenchmen, they were a little embarrassed. Giles Laurencin, from Chateau Meuliere was sitting to my right. He was very friendly and did speak some English. He told me his wife just had a baby boy four days before. WHAT? Why are you here? That's crazy.

So, that's my first two days in LA. I'll tell you about the tasting event tomorrow.