On Sunday I decided to make chili and cornbread. It was a gloomy morning. Football would be on all day. It just sounded good. 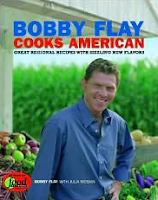 Instead of letting Don make the chili. I decided to make it and use a new recipe. I found one in my Bobby Flay cookbook. I'm a huge fan of Bobby's. So I knew it would be full of flavor and have some heat to it.

I had to go to two stores to get all the ingredients. He uses a lot of chili spices that apparently are not stocked at every grocery store. The cornbread recipe called for white corn meal. Couldn't find that. So I bought yellow.

Things did not go well in the kitchen. The recipe is time consuming. Definitely not worth all the effort and ingredients. I should have checked the recipe and reviews online first. Of course I did after. I think the people with positive reviews were telling a little white lie. I believe the people with multiple exclamation points in their answer were truthful.

The chili took forever to make. And it was horrible. Un-edible. It wasn't because I didn't like it. It's true, I didn't like it. But the heat and flavor from the chili's, especially the Chile's in adobo sauce, were so strong, it was just awful. Plus it was like soup. Don tried to fix it. He took out 4 cups of liquid and added more stuff. Nothing could save this big pot of yuckines.

Even the cornbread was not quite right! It was moist and looked perfect. But it was a bit crunchy. The corn meal was kind of gritty. How is this possible?

Thankfully, there was one thing that tasted good - the sour cream topping with diced poblano peppers. It was simple to make and tasted really yummy with tortilla chips.

By the time I was done in the kitchen it looked like a warzone from all the cooking. We didn't have anything ready to eat other than chips and I am just ticked off. So writing this is my therapy session. I know it's not nice to bash someone (Kanye, Serena) but I know what it's like to be frustrated and just want to tell someone off. Not a great idea to do it on stage and ruin someone's big moment. Or threaten to hurt someone. So I am going to vent here.

So, did I learn anything? Yes, let Don make the chili. Just kidding. I'm glad I tried. I wish it had turned out better. But I will try again - with a different recipe. (I will read reviews first.) And I will quit beating myself up about chili. It's wrong to be so mad about food. (It's just time, money, ego, hunger....ego...)

The day ended with Elli patting me on the back and saying "It's ok Mom, you did your best." Sweet. But actually made me feel worse. Then she said "I played upstairs to give you some space. I could tell you were frustrated."  Sighhhhhhhh. Again, so wrong.

So, as you can see, I still have a long, long, way to go in the kitchen. I think I'll take it easy this week. Stick to the simple stuff. Like nuking stuff in the freezer.

Email ThisBlogThis!Share to TwitterShare to FacebookShare to Pinterest
Labels: Entree