.....continued from yesterday
ok. After reading yesterday's blog I realized I set myself for a really big, dramatic story. I hate to disappoint, but the bikes didn't fall off. We didn't leave anyone behind, or run over anything. We lost something. But it's a really important something. And caused major stress and sweating.
Here's the story...
As we're driving on the highway to REI Don notices that he didn't latch the bolt to Elli's bike. This is not good.
Elli has a Trailer Bike that attaches to Don's with a fancy little bolt. We've already lost one, and replacements are not easy to come by. He can see in the side view mirror that the bolt is still there. We don't have far to go. But we're on Hwy 101. We're literally willing that dang bolt to hang on. It falls off. Doh! But we didn't see when. We search the parking lot, and side road, up and down. Not the highway. Although I was tempted.
We go in REI. They don't have a replacement. Without the bolt the bike is useless. GRRRRRRRR!!!
Stuff like this makes me CRAZY!  The bike should be made so the bolt doesn't fall off. Right??? People shouldn't have to worry about the bolt.
I go on line to look for the part. They have one accessory (see photo.) 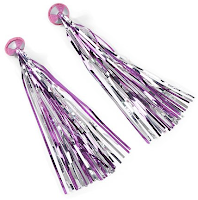 So I decide to write a letter to REI. I want to accomplish two things. 1) I want a replacement bolt, or two, by the following weekend and 2) They need to redesign the bike so the bolt won't fall off.  I shoot off an email at 6:30 Monday morning. My email was passionate (not mean) and expressed my frustration.
By early that afternoon I heard from a lovely gal, Liz T.,  in REI customer service. She is overnighting me two bolt replacement kits and is going to forward my feedback to quality control for further investigation. Mission accomplished. I feel so much better! Yeah!
In the note to me from Liz she mentions that there is a service kit for the bike that contains the necessary bolt.  So why don't they make this kit available in the store or on-line? Cuz we all know stuff happens. We just need the tools. Hopefully they will follow-through. Because the service guys at REI said we were not the first customers looking for a bolt. Seems simple enough, right? But we all know nothing is simple in the world of retail.
So, thank you REI for being so responsive. Because trust me, you don't want to get on my bad side. I refuse to shop at Best Buy and Expedia - all because of their customer service. I know I'm just one little voice. But I can be loud when I want to.
Posted by Kris Mulkey

Email ThisBlogThis!Share to TwitterShare to FacebookShare to Pinterest
Labels: bike