On February 5th,  2012 I got Cooper. He's fun, fast, and awesome.  He is the color of chocolate. He has two black stripes running down his back.

He is a Mini Cooper.

I got Cooper because me and my mom got in a car crash on the way to school. Someone hit our car and jacked the control of the steering wheel. So we called a tow truck.

The tow truck came and I got to sit in the best seat. When we got to G&C Auto Body everyone was nice to me. A couple minutes later the G&C Auto Body people said my mom was leaving to get a rental car and I could stay there. I said "okay." After she left I got kind of bored. So I did my homework. My mom came back with the rental car, then we rode to school. It was a Chevy!

When we got to school first recess bell was ringing Ding Dong.....Ding Dong. Everyone came in the classroom.

They all asked "Where were you???"

They all had a shocked face.

The day went by pretty fast. When school was over I went to dance.

Two weeks later we went to the Mini Cooper dealership and met Michael and Adam. They are really nice. Michael is a really good salesman. He got me the best car ever.

I named him Cooper.

Cooper seems really small on the outside, but he's actually big and awesome on the inside. 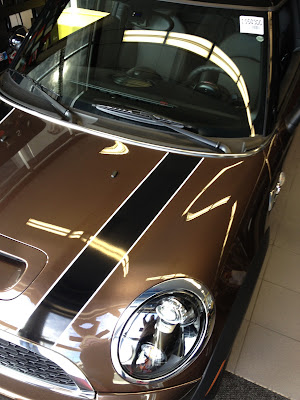 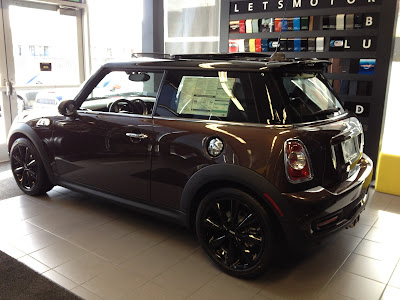 Yes, even with the money we got from the insurance company for the SAAB we now have car payments for the next 72 MONTHS. But isn't it cute and awesome!

It will be paid off just in time for Elli to drive it when she's 16.

Email ThisBlogThis!Share to TwitterShare to FacebookShare to Pinterest
Labels: a day in the life, Elli, Mini Cooper