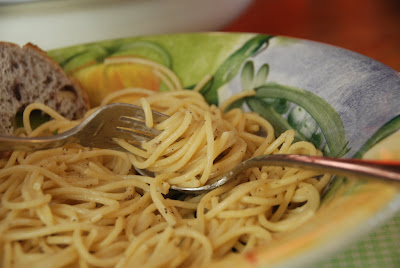 Don and I love watching America's Test Kitchen. Something about all the trouble they go through to create a recipe just fascinates us.

We love when they test kitchen gadgets and products, too. The episodes where they looked at ice cream scoops, canned tomatoes, paring knives, barbeque sauce, and chocolate bars immediately come to mind.

And then there are the recipes. Last Saturday they taught us how to make Foccaccia bread that was crisp on the outside and chewy on the inside. This recipe took way too long. So I probably won't make it. But the second recipe for an easy pasta dish definitely got our attention - Spaghetti with Pecorino Romano and Black Pepper.

The chef in the test kitchen tried 100 different variations until she got the recipe she shared on the show. Wow. I'm pretty sure I would have given up after the 2nd or 3rd try. There is no way I would have made this recipe 100 different ways.

We watched them roll the pasta on their fork, enjoying bite after cheesy bite. It was so rude! We were salivating watching them eat it.

We were sold. Especially when they said you can have it on the table in 10 minutes. That is our kind of recipe. 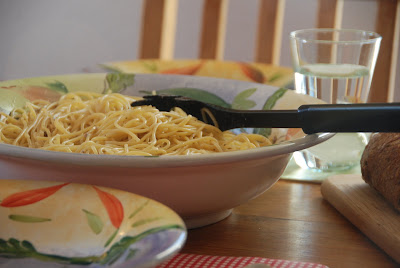 NOTE: Make sure you use PECORINO Romano. Very important, according to the Test Kitchen peeps. Regular Romano is NO GOOD. I don't know what will happen to you if you use the wrong cheese. But I wouldn't try it.

SO, WAS IT GOOD? Don and I thought the pasta was really good, it had a nice cheesy and peppery kick. But it was a little plain. The next time I make this I'm going to add some sauteed mushrooms and sausage or chicken for a little extra flavor. And tt probably took me 15 minutes to make, not 10. 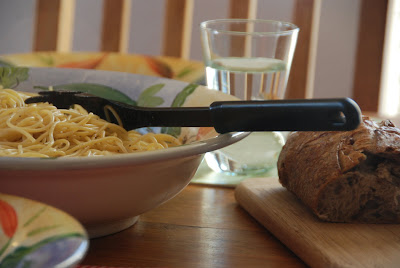