So in honor of all that time together I made a cake. Because all milestones should be celebrated with cake, don't you think?

We were in the middle of a little heat wave last week so I chose to make a cake using a Williams Sonoma mix. The less time in our non-air conditioned kitchen the better. Plus I really like the Williams Sonoma cake mixes anyway. They are perfect if you want a home-made cake but are afraid of making one completely from scratch. Or just don't have the ingredients, or the time, or the desire to do that.

The flavor and texture of the cake is amazing. It doesn't have that fake sugary-taste most box mixes have. It's gooooooood. And no one will know it's not from scratch.

The urge to tell your secret is big. But stay strong and keep your mouth shut. Your friends will be impressed with your baking skills. 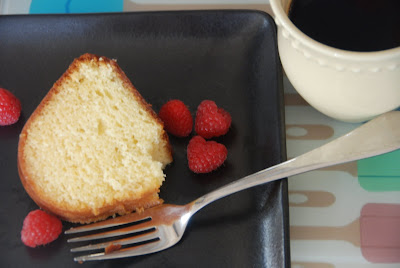 And don't skip the recommended glaze. It's especially delicious after you pour the warm honey glaze all over it. It soaks in and makes the cake so moist you don't even need frosting.

I think Sammy, the dog, would agree with this statement because I came downstairs to make coffee and found crumbs on the floor. I thought maybe Don had a late-night snack and dropped something then I realized the cake was gone. The entire tupperware container with half a cake in it was no longer on the counter.

I knew exactly where it would be.

Sam had dragged it to the dog cushion that sits behind Don's chair and feasted on six pieces of cake. He had the container tucked behind the chair and the cushion. It was licked clean.

No coffee and cake for me for breakfast.

wah wah.
Go ahead. Fourth of July is coming up. Let's celebrate with cake.

Oh, and remember, don't tell anyone it's from a box. It will be our little secret.
Posted by Kris Mulkey

Email ThisBlogThis!Share to TwitterShare to FacebookShare to Pinterest
Labels: a day in the life, Anniversary, cake, dessert, Williams Sonoma