I'm tired of all my usual chicken recipes. Tired of eating them and tired of making them. I'm in a chicken rut.

Then I remembered a chicken recipe I used to make when we first got married (ages ago) that Don and I really liked. It had mushrooms in it and gravy. I'm pretty sure we called it chicken and mushrooms. I used to make this a lot. We haven't had it in over 10 years, but I couldn't find the cookbook. So I started searching for something else.

Then Don came in the kitchen and asked me what I was going to make. "I don't know. What do you want?" I said in my most whiny, tired, sad, would-you-cook-dinner voice. I was really hoping he would magically jump in the kitchen and make dinner.

"Remember that chicken recipe you used to make a long time ago with the mushrooms and the gravy? Can you make that?" he asked.

Holy crap. Did he just ask me to make the very same recipe that was rambling around in my head? Have we have been married so long that we're now sharing brain waves? I think so. Scary.

I looked a little harder and found the cookbook. It's called "Chicken" by James McNair. I bought it because we like chicken. And the book was called chicken. And there were nice 4-color pictures with every recipe.

I laughed when I saw the name of the recipe, Chicken Scallopini. I don't know why we didn't call it by its name. Dorks.

Of course this time I had to improvise a little for ingredients I didn't have. I'll post the recipe for you and note my substitutions.

1. Pound the chicken breasts to 1/8 inch thick. Reserve. Or, slice the chicken breasts into thin medallions. That's what I did.
2. Heat 2 tablespoons each of the butter and oil in a skillet. Add the mushrooms and saute until tender, about 5 minutes. Remove mushrooms with a slotted spoon and reserve.
3. Heat the remaining 3 tablespoons each of butter and oil over medium-high heat. Add the chicken and saute. turning once, until browned, about 4 to 5 minutes total cooking time. (Mine cooked really fast because they were so small.) Remove chicken and reserve.
4. Add the shallots or onion to the pan and cook, scraping the pan bottom with a wooden spoon to loosen browned bits, until tender, about 4 minutes.
5. Add the white wine and chicken stock, bring to a boil, reduce heat to simmer, and cook until the liquids are reduced by half. Stir in the cream and season to taste with salt and pepper. Add mushrooms and chicken and simmer to reheat.
*I didn't have white wine so I used 1 cup of chicken broth, and used 1% milk. The sauce needed to be thickened with a teaspoon of cornstarch dissolved in a little milk.

Serve immediately. We like to pair it with fresh steamed vegetables and rice, pasta or potatoes.

Enjoy with a nice bottle of merlot or pinot noir. 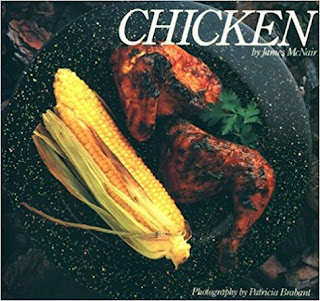 Click here to purchase James McNair's cookbook in case you're in a chicken rut and want your own copy.