Love this dress from Three Dots 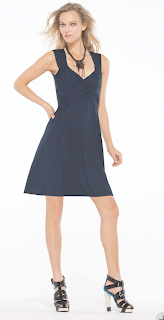 I had my $100 give card less than 24 hours. It was BURNING a hole in my cyberspace pocket.

I bought this really cute blue dress. I've already worn it to a cocktail party. I just love it. I wish I had a pic from the party. I've been waiting for the party pics to get posted - but the folks at Marin Designers Showcase are apparently in no hurry to publish the hundreds of pics the photographer was snapping all night. So, I'll have to show you the model from the Three Dots website. The dress pretty much looks just like this when you have it on. Except I wasn't striking a pose all night and I had to suck in my gut most of the evening. But that's ok. Us girls are used to that kind of torture. (I refuse to wear Spanx. They are nasty. IMHO)

The dress fits like a dream. It's really flattering and I know this will sound lame, but you don't have to worry about your bra straps slipping and showing. It's cut just right. Which is so nice!!!

The people at Three Dots are super nice. I was just a tad excited about winning my prize. So much so that I messed up my mailing address (combined work/home) and they called me to straighten it out.

The dress isn't fancy, but I feel like I need to be on a date or going somewhere fun to wear it. Most of our outings lately have been to places like High Tech Burrito. And that is not exactly a "put on the blue dress and heals kind of evening." I think I'll book a dinner reservation on OpenTable for when we're in Tahoe on vacation . It's our anniversary (#19. Gulp.) and my parents will be there too. Which means free babysitter!!

There is another dress on Three Dots that I really want. I believe I've been good lately, so maybe I'll treat myself. I can wear this one to the office - if I tone down the sassy and leave the 4" pumps at home. ha. As I was on the site looking for this picture I found a few other things that I like. Decisions, decisions, decisions.... 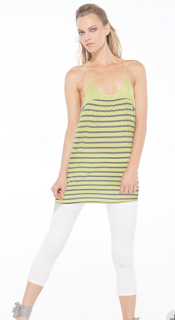 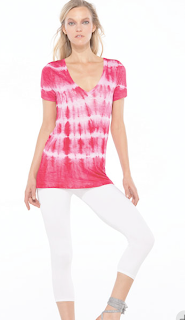 Guess what! The folks at Three Dots are giving my readers a 15% discount on anything you buy between now and June 30, 2010. Just type in the code THANKSKRIS. How cool is that? I have my own coupon code. THAT rocks. So get shopping my friends. Woo hoo! shopthreedots.com

Every time I look at this model I think of Madonna's song Vogue!


This is my favorite part of the song. Feel free to sing along to yourself. (No one is watching.) Hand gestures are optional. You know what I'm talking about.

Greta Garbo, and Monroe
Dietrich and DiMaggio
Marlon Brando, Jimmy Dean
On the cover of a magazine

They had style, they had grace
Rita Hayworth gave good face
Lauren, Katherine, Lana too
Bette Davis, we love you