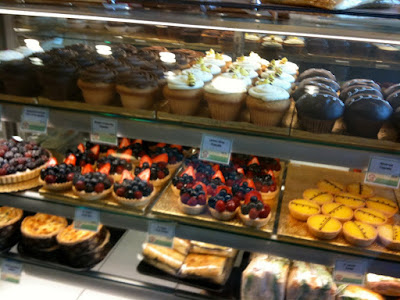 Last week I got to go on a field trip with Elli's third grade class to the Noe Valley Bakery in San Francisco.

This didn't happen accidentally. At the beginning of the year we got to sign up for which field trip we'd like to chaperone. Lucky for me I was the one that attended the meeting. Cuz I signed myself up for the bakery trip and signed Don up for the Miwok Indian museum trip. (hee hee hee)  Don't worry. He loves history, he'll be fine. 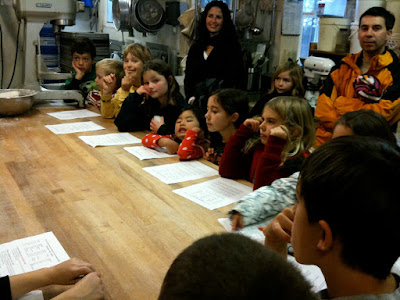 So we all drove into San Francisco to the bakery. I had never been before but had heard great things. I had three kids in my car, two girls and a boy. They talked non-stop the entire way. And I mean non-stop.

The conversation would shift based on what they saw as we were driving down Lombard and Divisidero. There was a long conversation about the motel Alexis' family owns on Lombard. Then one of them spotted a smoke shop. This conversation was hilarious. Elli didn't see any smoke coming from it so didn't understand how it could be a shop that sells smoke. Then they started talking about graffiti. Elli asked why people would do that to someone else's property. And one of the kids responded "because they're boneheads!" I almost spit out my coffee. 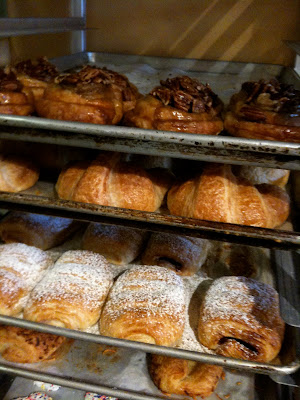 We finally got to the bakery, found a spot to park, fought over who would put money in the meter, and made it inside.

The owner, Michael Gassen, lives in Mill Valley and has kids that go to Elli's school - which is why he so graciously allowed 20 little monkey's into his kitchen to learn about the economics of running a bakery. 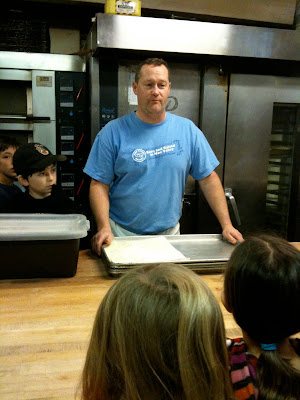 The kids were all very excited and had interesting questions for the owner like, "If an employee eats too much cookie dough do they get fired?" and "When you come up with a new recipe who writes it down?"

Of course my office called and sent me text messages the entire time I was there. So I spent half the field trip outside in the rain. sigh........but I still managed to do a little shopping before we left so we would have some yum yums at home - cupcakes, whole wheat sourdough, sticky buns and a quiche for lunch. 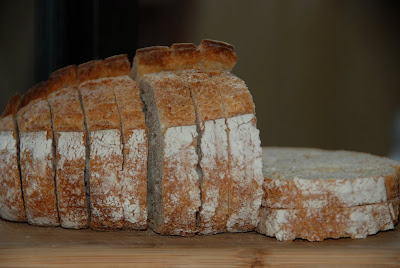 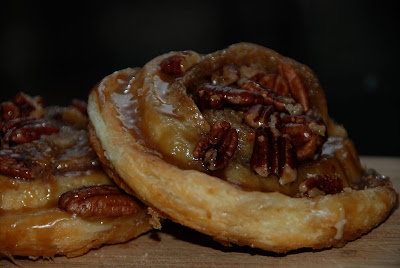 The kids all got a chocolate chip cookie and it was time to go home.  They were starving in the car so I gave them each a piece of the Whole Wheat Sour Dough I bought. They would have eaten the whole loaf if I let them.

Then we had a little dance party in the car to "I've got a feeling" by the Black Eyed Peas. The boy in our car had never, ever, had a dance party in the car before. He sat there stunned until the song was over. I'm sure his mother (the structural engineer) is wondering about the parent that chaperoned her son!
Posted by Kris Mulkey