One hour to go! 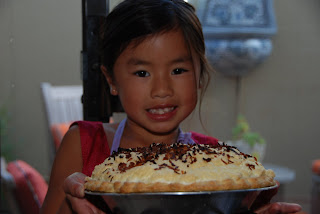 Wow.  I don't know about you, but there has been a flurry of activity in my kitchen. Elli has been my sous chef all day. It's awesome. She's old enough that she can actually lend a hand. Like stirring the milk for the pie for 4-6 minutes so it doesn't burn. Love it. We've only had one disaster so far. We didn't hear the timer go off for the pie crust. So it's a good thing I bought frozen pie crusts and they come two per package.

The meringue is not quite right. It looks all wrinkly. So I just checked the recipe and realize I forgot to put the sugar in the egg whites. DOH! I'm going to scrape it off and do it again. Don's sleeping. He'll never know. Ever. He never reads this blog. So unless you tell him we're good.

Everything else is pretty much done. Just have to make the gravy.  I'm waiting for the turkey to finish to do that. Then I'll pop the dressing and potatoes in the oven too. Everything tastes sooooooo good. I don't know if you've ever had Ina's parmesan mashed potatoes. But they are divine. I've sprinkled some Parm on top so they will get a little cheesy top. Oh yeah. Hopefully the rolls will have risen so I can bake them. Fingers are crossed. If not, we'll have them for leftovers. No worries. It's just the three of us. And at the moment Don is sleeping on the couch watching the game. So actually, I can have dinner ready whenever I want. He'll never know the difference. 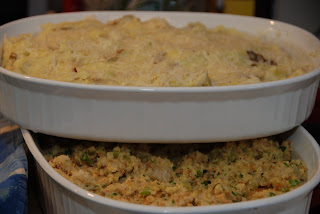 I definitely underestimated the amount of time they needed to rise. Probably should have made them this morning. Oh well. I've also decided to nix the green beans. I have a ton of food for three people.  We'll eat the beans when we make leftovers.

I'm sipping on my first glass of wine, BV Rutherford Cabernet. It tastes so good. Wilfred gave it 92 pts. He's right. It is good. It's twenty bucks at BevMo right now. (hint, hint)

It also feels GREAT to sit down for a minute.

I hope you are all having an awesome day!