Pasta with Sausage and Peppers

I found this recipe in my cookbook, Great Food Fast, from Everyday Foods. I have to tell you, I have had great success with the recipes in this book. They are full of flavor and are quick and easy to cook. Just like the books says. (duh!)

I like how it's organized by seasons. And each recipe has a picture - ah ha!!!! (angelicly sung.)

So now that it's Fall I'm checking out the Fall recipes. Tonight's recipe: Orecchiette (pasta) with Sausage and Roasted Peppers. Of course I could not find regular Italian/sweet sausage in Safeway,  so I bought the Jennie-O brand of turkey sausage. And I have to tell you, I'm glad I did. It tasted great. And is so much healthier for you. 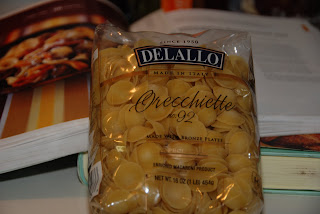 So this recipe is really easy. It takes 20 minutes to prep if you roast red peppers, if you choose to use jarred red peppers it will take no time to prep!

Sometimes there are gross parts when you cook. So the grossest part of this recipe is peeling the casing from the sausage. Ickkkkkkk. Just remove the gross evidence as soon as possible so it's out of site. One other thing about the turkey sausage, it didn't get as brown as pork sausage would. Give it some time in the pan, it will eventually, get brown. But don't worry. The flavor was good. And I would rather have less fat. So, yeah!

So pasta fans..... first you have to roast the peppers. I roasted them in the toaster oven, 400 degrees for 20 minutes, the recipe will give you directions in the oven. Then put them in a bowl to steam for 3 minutes. This makes the skins peel right off. 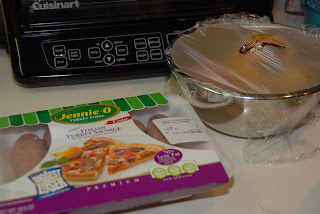 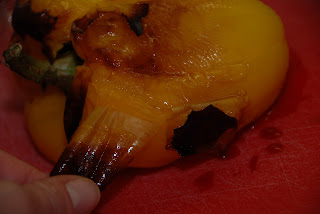 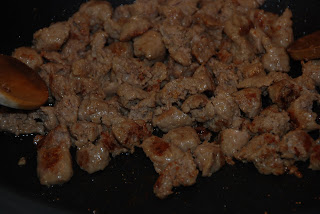 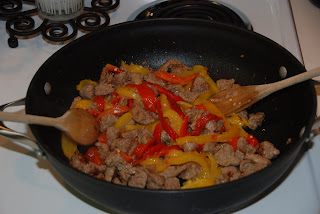 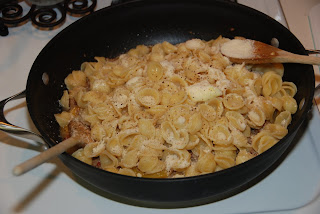 Serve it up and eat! 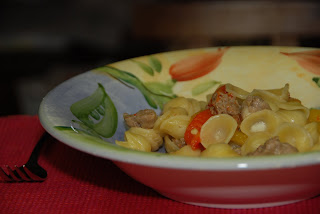 Of course I had a little vino to accompany the meal. Tonight I was in the mood for white, so I opened a 2007 Bridlewood Viogner. It was delish. In fact, I'm still enjoying a glass now! 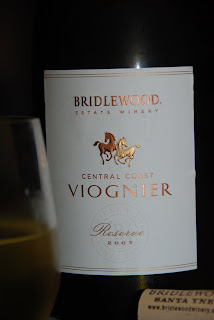 Here's the recipe. Let me know if you try it! We thought it was a great.

Orecchiette with Sausage and Roasted Peppers

1 lb orecchiette or other short pasta

1. Roast the peppers. Place the peppers, skin side up, on a foil-lined baking sheet; broil 4 inches from the heat until charred, 18-20 minutes. Transfer to a large bowl. Cover with plastic wrap; steam for 2 to 3 minutes. Rub off skins, reserving any juices in the bowl. Thinly slice peppers into 1/4 inch strips; return to the bowl. Set aside.

2. In a large pot of boiling salted water, cook the pasta until al dente according to the package instructions. Drain, reserving 1/2 cup of the pasta water. (Don't forget!!)

3. Meanwhile, heat the oil in a large skillet over medium heat. cook the sausage, breaking it up a with a spoon until browned, 7 to 10 minutes. Add the roasted peppers; cook until heated through.

4. Here you have a choice. Transfer the sausage mixture to a large bowl, or, mix everything in the large skillet like I did; add the pasta, butter, pasta water, and Parmesan. Season with salt and pepper, Toss to combine.