I don't know where I've been. But somehow I missed that there is a movie coming out about Anna Wintour, Editor of Vogue.

Sometimes referred to as "The Devil." Ms. Wintour has quite a reputation. Remember the movie "Devil Wears Prada"? Well Anna Wintour is the real person that Meryl Streep portrayed in the movie. Aaaah, now you're interested, right? Powerful women. Claws. Supermodels. I'm in. (kidding about the claws. They are beautifully manicured nails.)

The movie "September Issue", is a documentary by director R.J. Cutler, about the making of the single largest issue of Vogue ever printed - weighing in at a whopping 5 lbs! The magazine hit the news stands right as the economy was starting to tank in the fall of 2007. Remember? 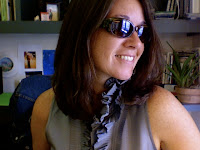 The movie is a behind-the-scenes peek at how the September 2007 issue was put together. It follows Anna Wintour and her creative director Grace Coddington, as they made major decisions involving big buck photo shoots with famous photographers, selecting designs for the issue, models, celebrities, famous designers.........meoooooooow, daaaahling.  I can't wait to see all the action! (This is me pretending to be a fashionista. Ha! Don't all celebs wear sunglasses inside?)

Will someone please bring me my feather boas?
Posted by Kris Mulkey

Email ThisBlogThis!Share to TwitterShare to FacebookShare to Pinterest
Labels: movies