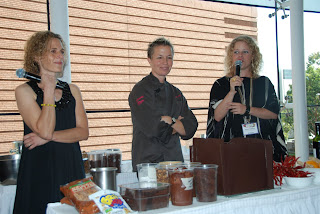 One of the demonstrations that got a lot of attention was sponsored by Scharffen Berger Chocolate and TuttiFoodie.com.

Chef Elizabeth Faulkner took about 18 ingredients and mixed them all up in the biggest chocolate box you've ever seen. She had everything from pretzels and corn nuts to brownies, peanut butter, and home-made marshmallow (YUM!) to stranger stuff like Pandan Leaf, smoked paprika and chili peppers.

After she got it all mixed up everyone donned rubber gloves, and dug their hands in the mix and ate the ooey gooey chocolatey concoction.  I'm serious. They did. I have to tell you. I couldn't do it. Watching everyone eat it was hilarious though. And watching the people watch the people, was also hilarious. It looked like....well.... the pictures tell it all. I will say one thing. The whole area smelled divine.

I was standing with Danica from Danica's Daily Blog. She was a trooper and tried it. She said it was "interesting and smokey" or something like that. She wasn't jumping up and down, so I decided to just take in the delicious aromas and leave it at that. 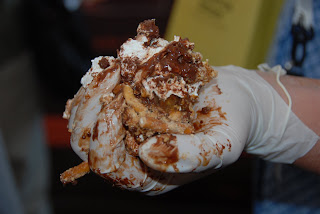 But don't get too grossed out. Because, part of the demonstration was announcing a really cool contest they are doing. You have to create a recipe using their chocolate and include one or more of the 16 adventure ingredients - and the grand prize is 10,000 smakaroos. I've never created a recipe in my life. But $10,000 is a lot of dough. And I have until January. And I LOVE chocolate. Plus they gave us a nice bag of chocolate to get started.  So why not try, right?

Here are the Adventure Ingredients:

This is the amazing goody bag we got from Scharffen Berger Chocolate. Somehow the canister of Cocoa powder didn't make it in the shot. This was quite a score!! 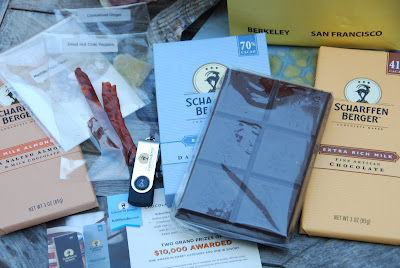 So I suppose I'll be doing some baking here soon. I can't wait! I'm sure I'll need some taste testers. So I'll let you know when the samples are ready.
Posted by Kris Mulkey