Chef Chiarrello is staring at me.

On Sunday, I opened the newspaper and BAM! right there on the cover of the food section is Michael Chiarrello. He seems to be everywhere lately. In my world at least.

Don has done work for him in his house and his restaurant. We've eaten in Bottega. We've shopped at Napa Style. He was a finalist on Top Chef Masters (which I watch.) He's on Twitter and Facebook and in my email box. He seems to be everywhere I am. Weird.

Here he is again. I think he's following me. Now he's in my living room. And he's smiling and staring at me. 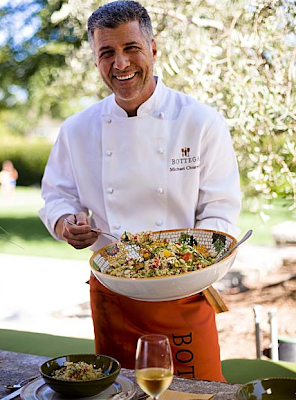 The article on Sunday was called "The Joys of Dining Alfresco" (eating outdoors this Labor Day weekend.) The idea was to get several Bay Area chefs to provide some hassle-free recipes to make and enjoy without having to be a slave to the kitchen or grill.

Chef Chiarrello's (pronounced KEY-a-rello) recipe was Couscous Salad with Warm Honey Vinaigrette. I made it Monday night. It was easy and really delicious. I'm definitely going to make it again and maybe even improvise a bit. It's that kind of recipe. You could add different veggies, fresh herbs, meats.  Yum.

Elli was a little leary at first. She loves couscous. But I usually just make the Near East Couscous in a box. This had stuff in it. She gave me a big pout when she saw me pour the couscous in the veggies. Then she ate it - and thought it was pretty good. She's learning that there is a reason there are so many ingredients in a dish. "Hey mom, if you take a bite of red pepper, almonds and couscous all together it tastes really good!" she says. That's my girl! A little foodie in training.

Of course Elli's favorite part of the dish was the toasted almonds. They gave it a nice crunch.

Here's the recipe if you want to make it. It makes a pretty big bowl. We ate it as a main course. But it would make a nice side dish for a picnic too. Something different from the usual green salad.

To Serve: Fluff the couscous with a fork. Place the arugula in a serving bowl. Toss with the warm squash, couscous, cucumber, red bell pepper and 2 tablespoons of the toasted almonds. Add enough dressing to coat the salad. Season with salt and pepper, and top with the remaining 1 tablespoon of almonds.

To make into an entree: add in leftover chicken, roasted chicken, or cooked shrimp

Photo from Stephen Lam of the SF Chronicle.
Posted by Kris Mulkey