You have to say it like a character on The Sopranos. S-p-e-z-z-a-t-i-n-o. It helps if you squint your eyes a bit and cock your head to one side when you say it. And don't forget to nod. Now try it one more time.

"Yo, anyone seen Joey Spezzatino?"

So yeah, I made a new recipe from My Giada de Laurentiis cookbook called Chicken Spezzatino. And I think I had the cast of the Soprano's in the kitchen with me. Weird, I know. 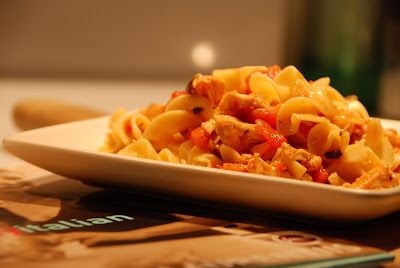 I didn't set out to make this recipe. I had chicken and a can of tomatoes and was in need of some inspiration. So I looked in the index of the Giada book and voila, I had MOST of the ingredients needed for Chicken Spezzatino. Perfect. This is how I fly. (And why things don't always taste exactly like they should.) But don't worry, I don't include those recipes here - unless they turn out. 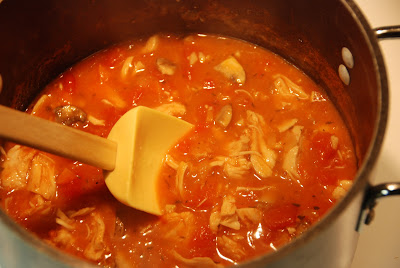 It's technically supposed to be a one pot meal. It took me three pots - a small, medium and large.

The large, because I decided to serve it over pasta. And the small to make a roux, because it wasn't quite thick enough (due to one of the missing ingredients: beans) so I made a quick roux to thicken it up a tad. The good news is it tasted good. It's the perfect weeknight meal.

I love these Italian one/three pot recipes. They're so homey and delish. 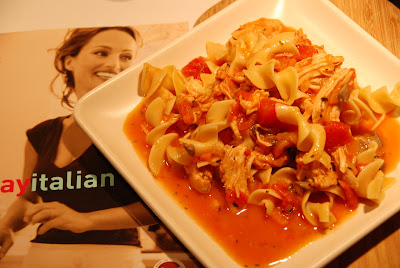 1. In a heavy saucepan, heat the olive oil over medium. Brown the chicken and remove from the pan.
2. Add  the celery, carrot, and onion, and saute until the onion is translucent, about 5 minutes.
3. Add the salt and pepper.
4. Stir in the tomatoes, broth, mushrooms, basil, tomato paste, bay leaf, and thyme.
5. Add the chicken and press to submerge. Bring the liquid to a simmer. Reduce the heat to medium low and simmer gently, uncovered, turning the breasts over and stirring occasionally, until the chicken is almost cooked through, about 20-25 minutes.
6. Add the kidney beans and simmer until the chicken is cooked through and the liquid has reduced to a stew consistency, about 10 minutes.
7. Discard the bay leaf. Place the chicken pieces on a cutting board. Use a fork and knife to shred the chicken.
8. Return the chicken to the pan and bring to a simmer.
9. Add salt and pepper to taste.

Elli had her friend Lou Lou over the night we ate this. She asked me if the noodles were donuts. I have to admit I gave her a look. "Uh, no. There are no donuts in the dinner with the chicken. Those are noodles." I told her. "Oh." she replied. She didn't believe me until she tasted one. Hmmmm.

*These are the ingredients I didn't have - fresh basil and beans. I used a few shakes of dried basil.  But fresh would have been better. The beans definitely would have given it more substance and creaminess. And I might try a different bean like cannelini. Not a huge fan of kidney beans.
Posted by Kris Mulkey