It was the day before Thanksgiving. I was looking for something in the pantry when suddenly I found TWO boxes of Scharffen Berger Bittersweet chocolate.  They practically jumped out of the cabinet, screaming for me to turn them into something magical. At least that's how I remember it.

I immediately knew I wanted to make some sort of candy.

I watched every episode of Top Chef Desserts this fall and saw them make little chocolate candies a lot. So that's what I wanted to make. But I know me, and I can sometimes bite off more than I can chew, so I thought I would start with something simple like a toffee-type candy. Or a brittle. The kind that has that carmel-butter flavor that just melts in your mouth.

It didn't take too long to find a recipe. When I saw the recipe for Chocolate-Almond Toffee in my 2010 Food and Wine Annual Cookbook I knew I had a winner! And lucky for me, these types of recipes don't call for many ingredients, just the basics - butter, sugar, chocolate, nuts, vanilla. Stuff I usually have on hand. This recipe is from Grace Parisi. Sr. Recipe Developer for Food and Wine Magazine. I've made some of her recipes before with success. So off I went.

There aren't that many steps to making toffee. All was well until I turned around to grab the camera to take one more picture when all of a sudden the mixture in the pot had gone from joyful bubbles to a blob. Waaaaaaaht the heck? I swear, I turned away from the pot for 5 seconds. 10 max. I knew the minute I started stirring it again that I messed up. The consistency was strange - all gloppy. So I cooked it for a few more seconds and took it off the burner to add the remaining ingredients. It had just reached the 300 temp. So what happened?  waaaaaaaaah  My toffeeeeeeeee!!!! boo hoo hoo. 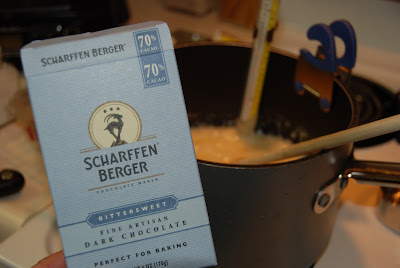 I poured it in the pan anyway. And what we ended up with isn't exactly toffee. It tastes amazing. But it never got hard. The consistency is more like frozen cookie dough. Which isn't a bad thing. Just not what I was expecting.  So for you candy makers out there - did I cook it too long, or not long enough? Anyone know? Grace Parisi, are you out there? Any advice? She's probably shuddering at how I botched her toffee!


Of course we've been eating it. In fact it's all gone. The flavor was addicting. No one was complaining. Someday I'll give it a try again. I just need to give my waist about six months to recover!!! Or immediately wrap up the yumminess and give it away as gifts.

Here's the recipe. Anyone want to give it a try? Click here >> Chocolate-Almond Toffee
Posted by Kris Mulkey