We recently redid a chair for one of our friends in Mill Valley. Most of our customers are up in Napa since that's where our business is located. But we're slowly doing more and more work for friends here in Mill Valley, and San Francisco, which is awesome.

The style of homes in our area is much different than in Napa. There are a lot of mid-century modern homes, and furniture, which is a cool, funky style to work on.

My friend loves mid-century modern furniture and has a thing for finding "treasures" at flea markets, yard sales, etc. The problem is that they are often not in the best condition.  And more often than not are funky in color and fabric choices.

She has a blue chair that she found years ago which had seen better days. Apparently her mom kept asking her why she didn't throw it out. She had plans for this chair. She knew she could repair it, and reupholster it, and it would be better than new. That's where we come into the picture. 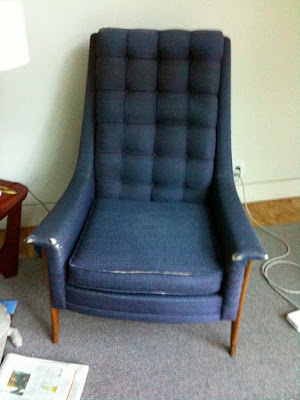 And here is what it looks like now. Tada! We stained the legs a darker, walnut color and upholstered it in a gorgeous fabric from Designers Guild. It really looks great with her black couch.

Next up is the orange chair in the background. 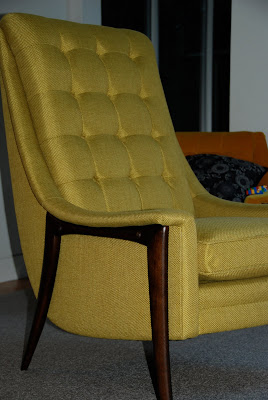 I love the curve on the bottom and the newly stained dark wood trim. 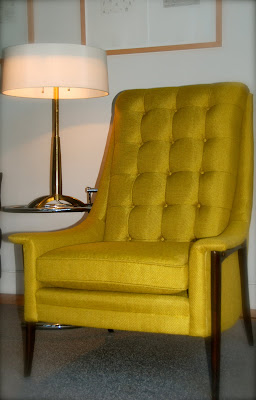 aaaaah. So much better. Right?

This style of furniture is really popular around here because we have a lot of mid-century modern homes. There was a real estate developer by the name of Joseph Eichler who lived in the area and built 11,000 modernist homes between 1950 -1974. They are known for open floor plans, walls of glass and atriums. My friend Amy's home is not an Eichler. But it's definitely a more modern, open floorplan.

Here's an Eichler house that is on the market right now in San Rafael (a town that is a suburb of San Francisco.)  It's a 3 bedroom, 2 bath home, 1,551 sf, listed for $685,000. Believe it or not, that's a bargain around here. So there is a lot of opportunity to revive old, worn out, mid-century modern furniture. Especially for folks that want authentic/period furniture in their mid-century home. 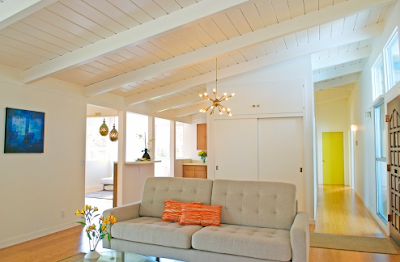 Eichler atriums and courtyards are often placed right in the middle of the home so they can be viewed from many rooms. This house was definitely staged. It's too neat and clutter free!


It's an interesting concept. Not everyone is a fan, but many people are. It's very California, isn't it? Reminds me of the Brady Bunch house!